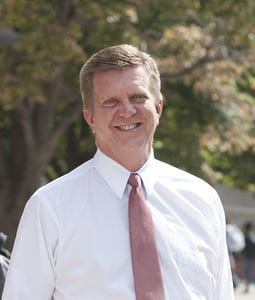 INDIANAPOLIS — Bill Blomquist, dean of the IU School of Liberal Arts at Indiana University-Purdue University Indianapolis, has announced he’s stepping down effective summer 2015 to return to regular faculty duties and pursue projects at IUPUI that align with his research interests concerning water resources management and policy.

An internationally recognized expert in water institutions and policies, Blomquist wants to contribute to the research-informed development of state water policy and planning for Indiana. According to a six-month study recently released by the Indiana Chamber of Commerce, there is a critical need for a state-driven water plan to identify resources and develop ways to deliver water to underserved areas.

“Bill Blomquist led the School of Liberal Arts through a transformational period –launching its two Ph.D. programs; welcoming the Department of Journalism and Public Relations; facilitating the creation of the Lilly Family School of Philanthropy; improving support of part-time faculty; and enhancing the scholarly strength of the school,” IUPUI Chancellor Charles R. Bantz said. “He now has the opportunity to focus his established expertise and leadership to a vital issue for Indiana: water.”

Bantz will soon form a committee charged with conducting a national search for Blomquist’s successor.