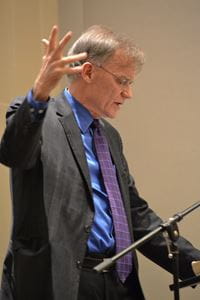 INDIANAPOLIS — The latest issue of a leading scholarly journal about African American history includes the publication of several papers presented during an Indiana University-Purdue University Indianapolis conference on the life and work of Frederick Douglass.

IUPUI professor John R. Kaufman-McKivigan served as guest editor for “Rediscovering the Life and Times of Frederick Douglass,” a special edition of the Journal of African American History.

Started in 1916 as the Journal of Negro History by Carter G. Woodson — who founded the Association for the Study of African American Life and History and the observance of what is now known as Black History Month — the Journal of African American History is a peer-reviewed quarterly. The journal is considered the “jewel” of the association and the premier publication in its field.

“I am very pleased that the Journal of African American History has printed the papers delivered at a stimulating symposium held on our campus in October 2012,” Kaufman-McKivigan said. “It is my hope that these highly insightful essays will draw attention to this often overlooked gem of an autobiography by Douglass.”

Kaufman-McKivigan, the Mary O’Brien Gibson Professor of United States History in the Indiana University School of Liberal Arts at IUPUI, is project director and editor of the Frederick Douglass Papers Edition, one of four scholarly publications housed in the Institute for American Thought, also part of the School of Liberal Arts. He specializes in antebellum America, Civil War studies, American ethnic history and American working-class history.

According to an Association for the Study of African American Life and History press release, the journal contributors are leading historians of 19th-century U.S. and African American history who offer insightful and well-documented analyses of “Life and Times of Frederick Douglass,” one of three autobiographical works.

A runaway slave turned abolitionist in antebellum America, Douglass became an influential writer and thinker of the Civil War and Reconstruction periods. The 2012 IUPUI conference celebrated the publication of the Frederick Douglass Papers’ first scholarly edition of Douglass’ final autobiography.

In addition to chapters on the Douglass autobiography, the special issue includes about 20 book reviews, as well as three essay reviews such as “12 Years a Slave: Narrative, History and Film.”

The Winter-Spring 2014 issue is available for purchase in hard copy and for course use through association publications director Karen May at kmay@asalh.net. A digital version soon will be available through ISTOR Current Journals.