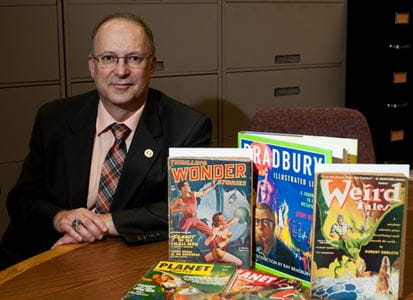 The lecture, in the West Reading Room of the Indianapolis Central Library, 40 E. St. Clair St., is free and open to the public.

“Ray Bradbury in the Twenty-First Century” draws on the unique and extensive archives of the Bradbury Center, which is home to the iconic author’s papers, his working library, and a lifetime of his awards and mementoes. These materials, recent gifts of the Bradbury family and the author’s longtime friend and bibliographer, Donn Albright, are part of the IU School of Liberal Arts at Indiana University-Purdue University Indianapolis.

“Everybody knows a Ray Bradbury story,” Eller said. “Generations of school children and college students have read his work in hundreds of anthologies and textbooks; teachers and librarians continue to value his stories and his poetic, metaphor-rich style.”

Bradbury’s stories have a unique staying power in American culture.

“He published more than 400 stories,” Eller said. “And he wove them into such modern classics as ‘The Martian Chronicles,’ ‘The Illustrated Man,’ ‘The Golden Apples of the Sun,’ ‘The October Country,’ and two enduring titles that emerged from his Midwestern childhood: ‘Dandelion Wine’ and ‘Something Wicked This Way Comes.’ ‘Fahrenheit 451,’ his classic cautionary tale of censorship and book burning, remains a perennial bestseller more than 60 years after publication.”

Eller’s illustrated presentation will focus on two intriguing questions: How did Ray Bradbury, a child of the Great Depression who never attended college, become one of the best-known American writers of his time? And why does this master storyteller of the 20th century remain a powerful cultural influence today?

Eller said, “He was born in 1920, when the Martian Canals of Percival Lowell and Edgar Rice Burroughs were still high in the American imagination; he passed away in 2012, just as the Curiosity Rover was about to land on Mars, at a site named in Ray Bradbury’s honor.” The center’s holdings include artifacts that have orbited the Earth, and Eller’s lecture will also assess the author’s lasting impact on the American space program.

The timing of the first Bradbury Lecture is especially significant. “Ray Bradbury Unbound,” the second volume of Eller’s three-volume study of Bradbury’s life and career, will be published by the University of Illinois Press in early September. At the same time, Kent State University Press will publish volume two of the Bradbury Center’s “Collected Stories of Ray Bradbury,” a series that recovers the seldom-seen original versions of Bradbury’s earliest published stories.

The Bradbury Lecture also kicks off a campaign to expand the Bradbury Center at IUPUI so that students, researchers and the general public can have better access to the archives and artifacts belonging to one of America’s premier storytellers.

The Bradbury Lecture is presented by the Indianapolis Public Library in conjunction with the Center for Ray Bradbury Studies. Parking for the Indianapolis Central Library is available via Pennsylvania Street in the library garage for a fee.