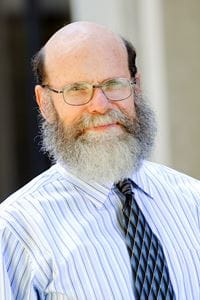 INDIANAPOLIS — The School of Science at Indiana University-Purdue University Indianapolis has named Joseph Rosenblatt as a professor of mathematics and chair of the Department of Mathematical Sciences.

Before joining the IUPUI School of Science, Rosenblatt spent the past 40 years in education, research and administration at Ohio State University, the University of Missouri and, most recently, the University of Illinois. He served a two-year appointment as a program director for the National Science Foundation’s Department of Mathematical Sciences from 2006 to 2008.

With multifaceted research, travel and administrative experience, Rosenblatt is a staunch supporter of interdisciplinary research and a believer in the value of collaboration among scholars.

“As an advocate for my colleagues, I look forward to finding ways to connect others on campus, particularly in engineering and sciences, with mathematical scientists,” he said. “Through collaboration in the STEM disciplines, we can make the most progress on problems and challenges facing society today.”

As chair of the Department of Mathematics at the University of Illinois (1999-2004, 2006), Rosenblatt managed a $13 million operating budget and nearly $10 million in grants and gifts. He also helped secure a $3.5 million grant from the National Science Foundation for the Vertical Integration in Research and Education Program. Rosenblatt served as the primary author and principal investigator for this grant.

“Dr. Rosenblatt brings vision, experience and an entrepreneurial spirit that will propel the Department of Mathematical Science into continued success,” said Simon Rhodes, dean of the School of Science. “I look forward to working with him as the school expands the effectiveness and impact of both its teaching and its research.”

Rosenblatt’s research has encompassed diverse areas of harmonic analysis, dynamical systems, functional analysis and measure theory. While much of his work has been theoretical, he also is experienced in applied mathematics. His interest in interdisciplinary research stems in part from his time at NSF, where he witnessed what mathematicians and statisticians can contribute to all types of research endeavors.