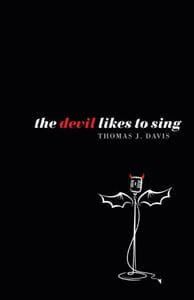 INDIANAPOLIS — Thomas J. Davis’ third and latest novel brings something new to the age-old tale of a man selling his soul to the devil.

In The Devil Likes to Sing (Cascade Books), Davis, professor of religious studies and associate dean for academic programs in the IU School of Liberal Arts at IUPUI, tells the story of Timothy McFarland, a failed theology student who begins writing fiction. Feeling he’s a hack, McFarland strikes a deal with Lucifer, who offers to shape him into a success.

“The book is a look at self-identity,” Davis said. “How we think of ourselves, who we are, whether or not we accept ourselves. Within all of us we have these self-doubts, thinking there is a way to change who we are that will make us more acceptable to others.”

Struggling with self-identity and self-doubt often opens protagonists up to searching for change.

“That’s where the notion of temptation comes in—at what price is one willing to make changes . . .” Davis said. “Once you hit the notion of temptation—especially for me, because I’ve spent my scholarly life studying the history of Christianity—the devil becomes an interesting tool by which to explore temptation because the devil as an image has the benefit of representing both an external force as well as something deeper, an internal struggle.”

Bringing something new to the age-old concept of the deal with the devil story was the author’s challenge. How could his devil differ from interpretations such as Milton’s Paradise Lost, the German myth of Faust, contemporary portrayals such as Neil Gaiman’s The Sandman, and even Saturday Night Live?

Davis’ solution is a devil who can be funny, witty and enjoy sublime Anglican church music as well as American rock and roll.

“The character needed balance—a balance of lightheartedness and darkness, gravitas and humor, familiarity and distance, friendship and contempt,” Davis said. “That was the hardest thing to maintain while writing the devil. He had to appear almost friendly, almost helpful, almost fun while currents of evil still ran beneath him.  That had to leak out around the edges, but not too much.”

The Indiana University-Purdue University Indianapolis professor wanted to be a storyteller long before his first foray into fiction, but he focused instead on his education and academic career.  The professor’s jump into novel writing was eventually triggered by boyhood memories of stories told by his father.

“My father was grieving about the disappearance of a way of life in the north Georgia mountains that he had known as a boy,” Davis says. “He would tell stories about when he was a kid, and I thought, ‘Wouldn’t it be great to capture my father’s sense of wonder in a novel and write about north Georgia through his perspective.’”

That exercise grew into his first novel, The Christmas Quilt (Rutledge Hill Press), a story about a 12-year-old boy and his grandmother’s final months of life. The book earned a Reader’s Choice award and was a selection in the Doubleday Book Club. “That book came from my need to pay homage to my ancestry,” Davis said.

Storytelling also plays a role in his classroom. “Much of what I teach is the history of Christianity, and it tends to be very narrative driven—I tell a lot of stories in class,” Davis said.  “I’ve noticed that students tend to be drawn in with a good story.”

In Davis’ new novel, the devil also takes the storytelling approach, only he twists religious history to suit his needs. Davis warns that the epigraphs that open the book—selections from Milton, Blake, and the New Testament on the nature of the devil—are important for the reader. The book also ends with a warning that readers shouldn’t take the devil’s word on matters of Christian faith and practices at face value.

“He is, after all, somewhat biased,” Davis said.