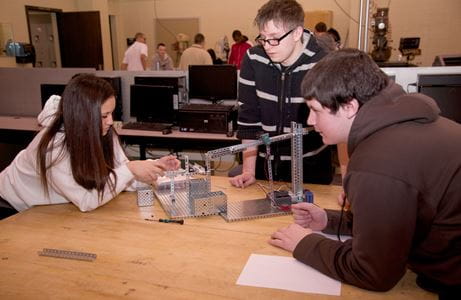 INDIANAPOLIS — A new study of Indiana high school graduates indicates that participants in the STEM curricular program Project Lead The Way are more likely to choose a college major in a science, technology, engineering or math field and to continue their education into the second year of college.

The study from the Center for Urban and Multicultural Education at the IU School of Education at Indiana University-Purdue University Indianapolis examined data about nearly 60,000 graduates, including nearly 4,000 who participated in Project Lead The Way, from the Indiana Department of Education and the National Student Clearinghouse. Researchers were looking for evidence that participation in the high school program had an impact on college enrollment, persistence toward a degree and pursuit of STEM majors.

The study paper is written by Gary Pike, professor of higher education and student affairs at the IU School of Education, and Center for Urban and Multicultural Education research assistant Kirsten Robbins.

PLTW is a nationwide nonprofit program headquartered in Indianapolis that develops activity-, project- and problem-based curricula designed to improve student learning in the STEM disciplines. From just a dozen New York state high schools in 1997, PLTW has grown to more than 5,000 schools in 50 states and the District of Columbia. Indiana has the nation’s third-largest number of schools participating at more than 300.

While several studies on PLTW have indicated positive effects on student performance and interest in STEM college majors, the research in Indiana represents one of the largest-scale studies to date.

“The ability to put together this database is remarkable in and of itself,” said Rob Helfenbein, Center for Urban and Multicultural Education director and associate professor of curriculum studies at the IU School of Education at IUPUI. The researchers examined 59,917 students who graduated from an Indiana high school in 2010.

“What we have now is a database that we can continue to compile,” Helfenbein said. “We can add cohorts with each graduating year and really take a look at the impact of this program and its continuing impact on higher education, including major, retention and graduation, and perhaps employment.”

“The database is among the largest compilations of data on PLTW in the U.S.,” Pike said. “As data from additional graduating cohorts are added, it will become the largest and most comprehensive source of information on the PLTW program.”

The authors concluded that the data indicate support for the effectiveness of PLTW as a way to increase the number of STEM graduates in Indiana. More research is required to understand the level of support. Results indicated PLTW participation significantly increased the likelihood that students would major in a STEM discipline, particularly engineering.

Among the other findings:

The findings reflect a potential “dosage effect” — meaning that the level of participation ties directly to outcomes.

“So if you want to see major impact related to STEM outcomes at the higher ed level, you’ve got to have three or more courses,” Helfenbein said. “So part of our next set of questions in continuing research is to take a look at the way in which schools and districts are using Project Lead The Way.”

Helfenbein said the Center for Urban and Multicultural Education intends to delve further into the data as the center follows more participants to learn how particular policies and administrative practices may impact participation and results for those students.

“The data from the study are a testament to the power of Project Lead The Way as a transformational experience for students,” said PLTW president and CEO Vince Bertram. “PLTW’s high-quality curriculum and world-class teachers are engaging students and preparing them to be America’s next generation of critical thinkers, problem solvers, collaborators, innovators and entrepreneurs.”

Demographic breakdowns of the data indicated trends that may warrant further study to broaden PLTW impact. Participants were more likely to be male than non-participants. Although the majority of participants were white and from middle to higher socioeconomic status, Helfenbein said future studies of PLTW data will examine how some schools and districts have been able to draw a broader participant base. Future studies may also include data from outside Indiana.

The Center for Urban and Multicultural Education at IUPUI was established in 1979. It has at its center the mission of creating connections between research, theory and practice with the ultimate aim of improving the quality of education throughout the P-20 continuum, focusing on the urban school setting from early childhood through graduate school levels, and including formal, alternative and community-based education.