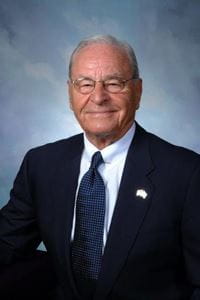 INDIANAPOLIS — A prominent Indiana businessman, civic leader and IU alumnus has committed more than $1.3 million to the Indiana University School of Medicine to fuel advances in research, education and care related to urologic diseases and to honor the IU physician he credits with saving his life.

Donald C. “Danny” Danielson’s gift establishes the Michael O. Koch Chair in Urology, named for the chairman of the school’s Department of Urology who successfully treated Danielson for bladder cancer. Danielson has also encouraged other patients, trainees and friends of Dr. Koch to support the initiative, bringing the total value of the endowed fund to more than $1.5 million.

“Think of the lives he’s saving every day because of what he’s doing,” said Danielson, vice chair of City Securities Corp. in Indianapolis. “I want to recognize him and help him attract the very best staff to IU.”

An endowed chair enables the IU School of Medicine to attract or retain a highly accomplished faculty member who will be named holder of the chair. Earnings from the endowed fund are used to support the individual’s work, giving the physician or scientist the flexibility to devote significant time and resources to research and physician training, two areas that are critical to the future of medicine.

Danielson said he and his wife, Patty, who passed away in December after 66 years of marriage, could think of no more appropriate way to pay tribute to his physician.

“I am incredibly honored,” said Koch, the John P. Donohue Professor of Urology. “Danny has been a friend for many years, and I’m grateful for all he has done to support the Department of Urology. My vision is to use this gift to propel us even further in our understanding of the complexities and management of genitourinary cancers.”

Genitourinary cancers include cancers of the prostate, bladder, kidney, testes and related organs.

Danielson, 94, vividly recalls the phone call several years ago when Koch told him he had cancer. Ultimately, Danielson needed to have his bladder and prostate removed. Koch, who is an expert in the complex reconstruction of the urinary tract, built a new bladder out of Danielson’s small intestines.

“He saved my life,” said Danielson, who considers his doctor a good friend. Koch carefully tracked Danielson for five years to ensure the cancer didn’t recur. “At the end of five years, he grabbed my hand and gave me a hug,” Danielson said.

Through the establishment of the Koch Chair, Danielson will help ensure IU remains at the cutting edge of urologic care and that future patients will have access to the most advanced treatments.

“Danny epitomizes all that IU could ever hope for in an alumnus: a gracious and fiercely loyal volunteer leader, advocate and supporter,” said Dan Smith, president and CEO of the Indiana University Foundation. “This extraordinary gift is one more example of Danny and his late wife, Patty’s, thoughtful generosity. Thanks to their vision, countless others will soon join Danny as grateful cancer survivors, embracing the luxury of planning for tomorrow. Danny and Patty have truly improved lives through their support of higher education at IU. And we are immeasurably thankful.”

Danielson has been a stalwart supporter of numerous organizations, but his loyalty to Indiana University is unsurpassed. He was a member of the IU Board of Trustees from 1959 to 1980, serving as president from 1969 to 1980, and is a current director of the IU Foundation.

He moved to Indiana from South Dakota to attend Indiana University at the urging of his high school athletics coach. He played second base for the IU varsity baseball team and, upon graduating with a degree in education in 1942, signed a contract with the Brooklyn Dodgers. He played one year in the minor leagues before joining the Navy and serving in World War II.

After the war, he returned to IU and took the position of assistant alumni secretary and was interim baseball coach during the 1948 season.

Danielson later sought a career in business and joined New Castle Products Inc. as a salesman selling accordion doors. He helped grow the organization, now known as Modernfold, from a small start-up into a top company by the time he stepped down as president nearly three decades later.

He transitioned to investment banking and accepted a position with City Securities in 1976. He still regularly makes the nearly 100-mile roundtrip commute from his home in New Castle to his office in downtown Indianapolis.