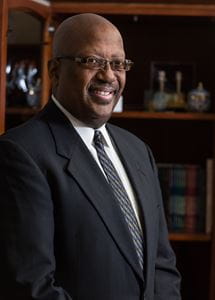 INDIANAPOLIS — Vernon A. Williams, former vice president of communications for Indiana Black Expo, has been selected as assistant to the chancellor for communications at Indiana University-Purdue University Indianapolis, officials announced recently.

“Vernon Williams brings a deep understanding of the Indianapolis community, extensive journalistic experience and a passion for education that make him an excellent partner in communicating IUPUI’s story,” Chancellor Charles R. Bantz said. “I am very pleased to have him on board.”

Williams assumed his duties April 1. He brings more than 35 years of experience in education and media to his new job.

“I am excited about the prospect of channeling my communication skills and experience to the enhancement of a progressive, respected, high-achieving institution like IUPUI,” Williams said. “Because IBE has an emphasis on youth, family, community, culture and education, the transition to being part of the IUPUI team focused on branding, messaging and outreach feels natural.”

As vice president of communications for Indiana Black Expo from 2012 to 2014, Williams was responsible for a wide range of duties, including preparing high-impact communication material, writing speeches, developing speaking points for IBE leadership, writing news releases and brochures, and creating promotional and advertising strategies.

Williams received his Bachelor of Arts degree in journalism from Indiana University and a Master of Arts in communication from Purdue University. He is attending the Master of Education in administrative licensing program at Ball State University.

In his media career, Williams has worked as a reporter, columnist and member of the editorial board at The (Gary) Post-Tribune; editorial page editor and managing editor at the Gary Info Newspaper; morning drive personality at WLTH-AM; and station manager at WGVE-AM.

Williams split his education career between Gary Community School Corp. and Indianapolis Public Schools, where he taught radio and television; he also served in administration as a marketing coordinator in Gary and supervisor in Indianapolis. He taught public speaking at Purdue University Calumet in Hammond, Ind., and interpersonal communications at Ivy Tech Community College in Gary.

Williams and his wife, Joyce, have a daughter, Bridget.