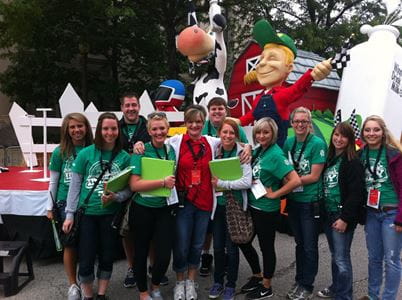 Each of the students will be assigned to one of 10 public announcement stations along the parade route. The students will interact with the radio personalities to pass information to and from the parade management control center. Updates are given to their assigned radio station about current parade conditions that may cause delays and require the announcers to go off script to fill in the time gap.

The 500 Festival Parade, beginning in 1957, has grown to be one of the signature events held in the United States each year. Held on the eve of the Indianapolis 500, the parade is expected to draw 300,000 spectators from around the country to line the streets of Indianapolis.

Susie Benko, a Department of Tourism, Conventions and Event Management lecturer in the IU School of Physical Education and Tourism Management, said the students will meet her at 7:30 a.m. on parade day. Each will be given a radio and instructed on how to use it; they will also be given a complete parade script that the station broadcasters use to announce the parade. The students will go to their assigned radio station, introduce themselves to the broadcasters and keep them apprised of any changes from the original script resulting from weather, injury or other issues.

Students from the school have provided communication assistance to the parade since 2008.

Recruited from an Introduction to the Tourism Industry class she teaches, Benko said students find the experience to be a valuable one. “They see the level of coordination it takes to put on large events, including the staging, the lineup, and the importance of timing and communications, which is their role.”