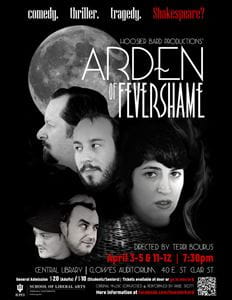 “Arden of Fevershame” encompasses elements of passion, intrigue, murder and suspense, tempered with comedy. Bourus said her version will employ a “film noir atmosphere of fog and shadow” to reflect the theme: the tension of the crime.

“The increasing nervousness of the young wife and her lover, the ultimate crime and what happens afterwards are all part of the mystery,” Bourus said. “It’s the first domestic tragedy and the very first black comedy in English drama.”

Bourus, founding director of Hoosier Bard, is an Equity actor as well as a professor of English drama in the IU School of Liberal Arts at IUPUI. Explaining Hoosier Bard’s mission, she said, “Every play we do has an editorial crux linked to it: a crux that can only be solved through performance.”

Each of the plays Bourus has directed — “Young Hamlet,” “History of Cardenio,” “Measure for Measure” and now “Arden” — is considered editorially problematic in some important way. Hoosier Bard stages these plays to test those editorial problems. Using the stage as a kind of laboratory for theater experiments, editors can make important inroads — changing the way they emend the text, making the edition that the NOS team is even now creating, ever more valuable to scholars, theater practitioners, and students. This singular approach has garnered international attention, a phenomenon Bourus attributes to the company’s singular vision: “edit and do theater, which makes us very unique.”

An aspect that makes this production of “Arden” unique, and that led Bourus to change the traditionally used title to the play, is also the kind of pun and word-play for which Shakespeare is known.

“I realized as I was reading the [earliest extant] text, printed in 1592, that the running head did not say ‘Faversham.’ It said ‘Fevershame,'” Bourus said. “True to form, Shakespeare seems to have twisted the title. Rather than ‘Faversham,’ the name of the town where the action actually happened, he penned ‘Fevershame.'”

Tickets are available by credit card online.: $10 for students with a valid ID, $10 for seniors and $20 for general admission. Tickets will also be available by check or cash at the door.

There will be two performances using ASL interpreters. Parking is free of charge in the Central Library lot. Click here for event updates.

About the New Oxford Shakespeare

New Oxford Shakespeare, a research center, is creating a new, complete Shakespeare edition in multiple media formats for the 21st century. Building on previous studies and examining performances of the plays, the Oxford University Press-commissioned undertaking will produce work in multiple volumes, formats and media.

Hoosier Bard Productions and the NOS will collaborate with Vonnegut Memorial Library on Sept. 24 in support of “Banned Books Week” with a reading of Shakespeare’s “Richard II” and a lecture by Bourus on “Censorship in Shakespeare’s England.”