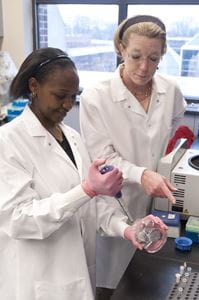 INDIANAPOLIS — The National Institutes of Health recently awarded IUPUI a $1.25 million grant to prepare undergraduate students from underrepresented minority populations, including students with disabilities, for admission to graduate programs in the biomedical and behavioral sciences.

The Indiana University-Purdue University Indianapolis Post Baccalaureate Program, or IPREP, draws on IUPUI’s programmatic and research strengths in the health and life sciences. IPREP will prepare four to six students each year for the next four years for successful graduate and professional careers through an intensive research internship coupled with a rigorous and individualized academic and professional/personal development plan. Designated as IPREP fellows, select students will be provided at least 12 months of paid research experience working with an active faculty research mentor in an area relevant to the student’s career interests.

Training will be available in five areas of interest to the nation’s health industry — biomedical engineering, clinical psychology, human performance and kinesiology, medical neuroscience or the psychobiology of addictions — toward the goal of matriculation into these graduate programs. IPREP’s long-term goal is to improve diversity in the community of graduate students and faculty at IUPUI in the biomedical and behavioral sciences. Transdisciplinary work is emphasized through frequent interaction of the IPREP fellows, their research mentors and other members of the IPREP support staff.

Under the direction of David Burr, distinguished professor and associate vice chancellor for research at IUPUI, the grant is an innovative partnership between four schools, the Office of the Vice Chancellor for Research and its Center for Research and Learning. Coordinating the work of these units are co-investigators, Rafael Bahamonde, associate dean and professor of kinesiology in the IU School of Physical Education and Tourism Management; Kim Nguyen, director of operations in the Urban Center for the Advancement of Science and Mathematics Education and director of the Louis Stokes Midwest Center of Excellence; Sherry Queener, director of the graduate office and professor of pharmacology and toxicology in the Indiana University School of Medicine; and Richard Ward, executive director of the IUPUI Center for Research and Learning and chancellor’s professor of anthropology in the Indiana University School of Liberal Arts. The first cohort of students is expected in August 2014.

The most recent report by the National Science Foundation indicates that only 6 percent of research scientists are African American and only about 5 percent of scientists are Hispanic. Yet research shows that minority undergraduates in the sciences aspire to graduate degrees, Burr said. “The lack of diversity in BBS disciplines is evident at IUPUI, where the percentage of African Americans among full-time faculty is 4 percent while Hispanics comprise only 2 percent,” he said.

According to Ward, the IPREP grant builds on the long history in the Center for Research and Learning of supporting access to advanced degrees for students who have traditionally had limited opportunities.   The center will use its existing programming developed to promote undergraduate success to help IPREP students set and achieve high expectations through providing mentored research experience coupled with strong social support.

“The CRL will benefit from connecting with some of the strongest graduate and professional programs in the state, and we hope to develop additional mentors and research opportunities for other IUPUI students beyond those involved in IPREP,” Ward said. “The campus and broader academic community will benefit from the injection of greater diversity in the faculty and professional ranks together with the infusion of talent and fresh thinking this will bring to these disciplines.”

“We are thankful to the National Institutes of Health for their support of this important initiative, which will provide the opportunity for students from underrepresented minority populations to be mentored and pursue doctoral studies at IUPUI in areas of great national importance and societal impact,” said Kody Varahramyan, vice chancellor for research. “We are also thankful to Dr. Burr and Dr. Ward for their leadership in developing this initiative.”