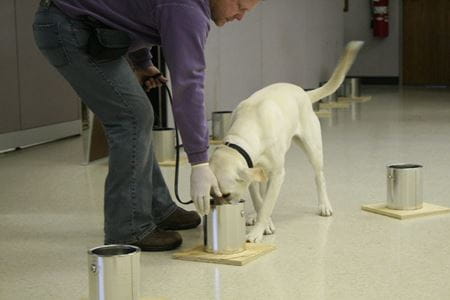 INDIANAPOLIS — A research team at Indiana University-Purdue University Indianapolis has helped determine the science behind how canines locate explosives such as Composition C-4, a plastic explosive used by the U.S. military. The study found the dogs react best to the actual explosive, calling into question the use of products designed to mimic the odor of C-4 for training purposes. These findings are the culmination of a four-year contract funded by the U.S. Department of Defense.

The effectiveness of trained detector dogs is well established, but the study sought to determine which chemical compounds cause a dog to recognize a particular explosive and alert to it. Previous studies have suggested that certain non-explosive chemicals emitted by Composition C-4 cause dogs to alert, and that these specific chemicals could be used as mimic substances to train the dogs in place of real explosives.

In the first phase of the study, IUPUI researchers discovered that the non-explosive chemicals given off by C-4 mimics also are present in a variety of everyday plastic objects. Objects tested included PVC pipes, electrical tape, movie tickets, a plastic grocery bag and plastic food wrapping. Several of the tested items emitted appreciable levels of a mimic compound recommended by some vendors for training canines.

The second phase exposed 33 trained canines to these vapors to see whether the dogs would respond. The field trials demonstrated that the dogs — from the Department of Defense, Department of Justice, Amtrak and other agencies — failed to respond in any significant way to specific odor compounds found in C-4. The results indicate that if the dogs are trained on the full scent, they will only detect real explosives.

“The canines are not easily fooled; you can’t pick and choose components of explosive odors and expect the dog to respond,” Goodpaster said. “Dogs are specific, and it’s the full scent that causes them to alert.”

The study also sought to better establish the scientific facts needed for canine detection to be legally admissible evidence — an effort that found using mimic compounds could present challenges in court. By training with real explosives, false positives are unlikely in the field. Overall, the team recommended that dogs be trained with actual, not mimic, explosives.

While technology is available to search for explosives, canines remain the best option because of their speed, sensitivity and ability to search large numbers of items, Goodpaster said. Co-authors on the study include current and former IUPUI School of Science undergraduate and graduate students William Kranz, Kelley Kitts, Nicholas Strange, Joshua Cummins and Erica Lotspeich.

The full study appears in the March 2014 Forensic Science International.

About the School of Science