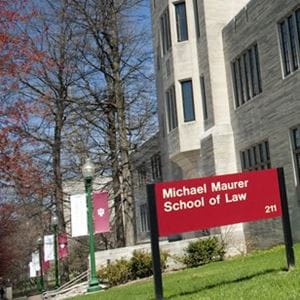 BLOOMINGTON, Ind. — A panel of distinguished jurists will visit the Indiana University Maurer School of Law on Friday, March 7, to hear arguments in a case involving Nazi-looted artwork and social media in the courtroom.

The arguments by four law students mark the final round of the law school’s annual Sherman Minton Moot Court Competition, in which students act as appellate lawyers representing clients in a realistic setting. This year, 149 students — nearly 75 percent of the second-year class — took part in the tournament-style competition, which began in September.

This year’s case problem, a civil forfeiture action styled as U.S. v. One Painting Entitled Guarded Secrets, addresses two issues: Whether the U.S. Constitution’s Excessive Fines Clause permits the government to seize all the assets of the fictional Gem City Art Museum as a penalty for trafficking in Nazi-looted artwork; and whether reporters’ use of Twitter during the trial violated the museum’s due process rights.

“The issues raised in this year’s competition are highly topical,” said professor Seth Lahn, moot court faculty advisor. “The scope of the government’s power to seize property through civil and criminal forfeiture, the efforts of trial courts to keep ubiquitous smartphones and social media from disrupting jury trials, and battles over art repatriation and provenance have all been the focus of intense debate over the past several years.”

The event will take place in Room 123 of the IU Maurer School of Law at 211 S. Indiana Ave. It is open to the public and will be followed by a reception on the third floor. Doors will open at 7 p.m., and the program will begin at 7:30 p.m. The annual competition is named after Indiana native and U.S. Supreme Court Associate Justice Sherman M. Minton. A 1915 graduate of the Maurer School of Law, Minton served on the court from 1949 to 1956 and took part in a number of historic decisions, including Brown v. Board of Education.