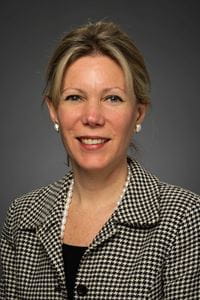 INDIANAPOLIS — Marion E. Couch, M.D., Ph.D., MBA, has been named the Richard T. Miyamoto Professor and chair of the Indiana University School of Medicine Department of Otolaryngology-Head and Neck Surgery. Dr. Couch will assume her duties June 1, pending approval by the Trustees of Indiana University.

A head and neck surgical oncologist, Dr. Couch is professor and interim chair of the Department of Surgery at the University of Vermont College of Medicine and surgeon-in-chief of Fletcher Allen Health Care. She joined the University of Vermont faculty in 2010 as division chief of otolaryngology-head and neck surgery and was appointed interim chair and physician leader of surgery in 2011. She also served as interim chief of ophthalmology and associate vice president of finance for the UVM Medical Group.

“Dr. Couch has had a distinguished career in otolaryngology, in addition to extensive administrative experience,” said Jay L. Hess, M.D., Ph.D., IU vice president for university clinical affairs and dean of the School of Medicine. “The recipient of numerous teaching and service accolades, Dr. Couch is a distinguished clinician and researcher who will expand clinical programs across Indiana, build on the strengths of the IU otolaryngology program in hearing as well as further the department’s translational programs in head and neck cancer.”

Dr. Couch grew up in Ithaca, N.Y., and received a bachelor’s degree in microbiology from Michigan State University and her medical and doctoral degrees from Rush Medical College. Later she received a Master in Business Administration from Duke University Fuqua Business School. She completed an internship and a residency in otolaryngology at The Johns Hopkins Hospital and began her career there as a faculty member.

An accomplished investigator, Dr. Couch created the Division of Surgical Research at the University of Vermont College of Medicine. Her research interest is cancer cachexia, a wasting syndrome that affects cancer patients. In addition, she lectures nationally on health care reform and its potential impact on academic medicine.

Dr. Couch will succeed Richard T. Miyamoto, M.D., chair and Arilla Spence DeVault Professor of Otolaryngology-Head and Neck Surgery and medical director of audiology and speech language pathology. An IU School of Medicine faculty member since 1978, Dr. Miyamoto performed Indiana’s first cochlear implant in 1979. In 1995, he and his team at Riley Hospital for Children implanted a device in a 16-month-old boy, the youngest ever to receive a cochlear implant at that time. The surgery paved the way for changes in the age that children with hearing deficits received implant treatments.

“It is a tremendous honor to be selected to become the next chair of otolaryngology at IU. My hope is to build upon the impressive foundation that Dr. Miyamoto established over the years. The department enjoys a wonderful national reputation, thanks to Dr. Miyamoto and the faculty and staff,” Dr. Couch said.