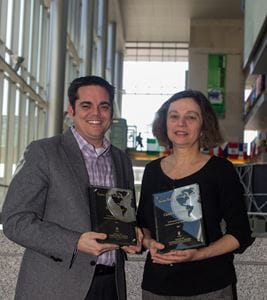 INDIANAPOLIS — A Department of World Languages and Cultures faculty member in the IU School of Liberal Arts and an academic advisor in the Kelley School of Business were chosen as the 2014 recipients of the Susan Buck Sutton awards. The IUPUI Office of International Affairs presents the awards to a campus faculty member and a staff member who made significant contributions to study abroad programs at Indiana University-Purdue University Indianapolis.

Claudia Grossman, a senior lecturer and interim director of the Max Kade German-American Center, and Eric Raider, a Kelley School of Business academic advisor, were presented their awards at the IUPUI International Festival on Feb. 27.

The award is named in honor of Susan Buck Sutton, who was the first associate vice chancellor for international affairs at IUPUI.

Selection of award recipients is based on efforts to promote a campus climate where students are encouraged to study abroad and new programs are developed and supported.

Grossman’s efforts were noted in a nominating letter that said, “It is hard to imagine today’s international landscape at IUPUI were it not for the extraordinary creativity and investment of time and energy that Claudia Grossman has spent over the last two decades on making study abroad a reality for many students and faculty across several schools on this campus.”

A list of Grossman’s accomplishments in the area of study abroad were cited, including study abroad program development, creation and instruction of courses connected with study abroad, program direction, student advising and publications related to study abroad.

Raider’s work to expand the undergraduate study abroad program at the business school was cited, with one nominator saying, “Eric took the reins of the Kelley undergraduate program and has not looked back. It is evident that Eric is passionate about study abroad and has already made a lasting impact on our programs in Kelley.”