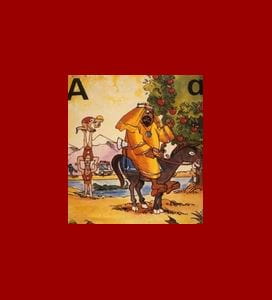 INDIANAPOLIS — A traveling exhibition exposing stereotypical portrayals of Arabs and Muslims in U.S. popular culture will be displayed Feb. 26 to March 21 at Indiana University-Purdue University Indianapolis.

“A Is for Arab: Stereotypes in U.S. Popular Culture” will be at the Multicultural Success Center in Joseph T. Taylor Hall, 815 W. Michigan St. The exhibit’s opening reception takes place from 4 to 6 p.m. Feb. 27 at the center.

The IUPUI Office of International Affairs is sponsoring the exhibit and other events about Arab culture, in partnership with the Multicultural Success Center, Division of Student Affairs and IUPUI student organizations.

“IUPUI is a university promoting diversity and moving toward internationalization of its campus. Putting this vision in action, the Office of International Affairs is organizing a series of events to promote understanding of the Arabs and their cultures over three weeks,” said Amira Mashhour, a lecturer, director of the Arabic program at IUPUI and a primary organizer of the event. “‘A Is for Arab’ will be the inaugural event for these events. It will be a visual action to eradicate prejudices and address some questionable issues related to Arab culture.”

Sandra Lemons, who also is a primary event organizer, said, “The goal of this program is to raise awareness of Arab culture and society on campus and in the surrounding community. Most importantly, we want to break down harmful stereotypes that Arab people in our community deal with on a daily basis.” Lemons is associate director for student services in the Office of International Affairs.

“A Is for Arab” features photographs of objects and materials from the Jack G. Shaheen Archive at Tamiment Library and Robert F. Wagner Labor Archives, and it documents U.S. popular culture representations of Arabs and Muslims from the early 20th century to the present. The exhibit provides historical context about these images, which include film stills and comic books.

Shaheen has dedicated his career to identifying and contesting damaging stereotypes of Arabs and Muslims in American media. He also has connected their development to the portrayals of other marginalized groups including Jews, Native Americans, Asian Americans, Latinos and African Americans. He is a Distinguished Visiting Scholar at New York University’s Asian/Pacific/American Institute and The Hagop Kevorkian Center for Near Eastern Studies.