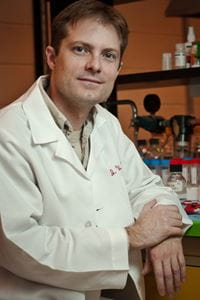 INDIANAPOLIS — A newly identified protein and other proteins it interacts with could become effective targets for new drugs to control the parasite that causes toxoplasmosis, researchers led by investigators at the Indiana University School of Medicine have reported.

The discovery could also open new research pathways for treatments for malaria.

The researchers determined that the protein, an enzyme called GCN5b, is necessary for the Toxoplasma parasite to replicate, so interfering with its activities could control the parasite. GCN5b is part of the molecular machinery that turns genes on and off in the parasite, working with other proteins that, the researchers discovered, are more plant-like than their counterparts in humans.

“GCN5b is a very different protein than its human counterpart, and proteins it interacts with are not found in humans,” said William J. Sullivan Jr., Ph.D., associate professor of pharmacology and toxicology.

“That’s what makes this exciting — rather than just having one enzyme that we could go after, there could be a whole collection of associated enzyme components that could be potentially targeted for drug therapies to control this parasite,” he said.

In discovering that some of the proteins interacting with GCN5b are plant-like transcription factors — proteins that bind to DNA — the researchers filled in what had been a missing link explaining how the parasites control the process of turning genes on and off, known as gene expression. The plant-like transcription factors recruit the GCN5b enzyme complex to activate a wide variety of genes for expression.

When the research team disabled the GCN5b complex, parasite replication swiftly came to a halt.

Dr. Sullivan and his colleagues reported their findings in the Jan. 2, 2014, online edition of the journal PLoS Pathogens.

An estimated 60 million people in the United States are infected with the toxoplasmosis parasite, but in most cases the infection produces flu-like symptoms or no symptoms at all. However, for people with immune system problems – such as those undergoing chemotherapy or people with AIDS – the disease can cause serious effects including lung problems, blurred vision and seizures. Also, infants born to mothers who are infected for the first time during or shortly before pregnancy are at risk for severe complications, miscarriages or stillbirths.

One of the most common routes to human infection is via cats, in particular their feces or litter. Eating undercooked meat from infected livestock can also result in human infection.

Although there are anti-parasitic drugs available to treat acute episodes of toxoplasmosis, it’s currently impossible to completely eliminate the parasite because it can switch from an active to a latent cyst form in the body. Since GCN5b is active during both acute and latent stages, the enzyme and its associating components are very promising candidates for drug targeting, Dr. Sullivan said. Because the transcription factors are plant-like proteins not found in humans, drugs targeting them would be much less likely to affect human proteins and cause adverse effects.

Researchers also use Toxoplasma as a model organism for the malaria parasite Plasmodium, meaning much of what is learned about Toxoplasma could lead to new treatments for a disease that struck an estimated 207 million people worldwide in 2012 and caused an estimated 627,000 deaths, most of them children. Dr. Sullivan noted that the malaria parasite also possesses a GCN5 enzyme, as well as the plant-like proteins.