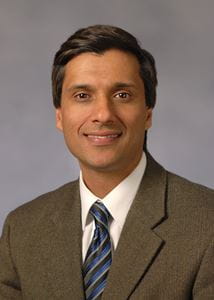 INDIANAPOLIS — Cognitively impaired older adults released from the hospital are less likely to be rehospitalized within 30 days if they go to a nursing home than if they return to their own home or the home of a family member, according to an Indiana University and Regenstrief Institute study.

Discharge destination following hospitalization and cognitive status are co-dependent factors, according to the study, which followed 976 men and women, age 65 and older.

The study findings are reported in “Interaction Between Cognitive Impairment and Discharge Destination and Its Impact on Rehospitalizations,” published in the November issue of the Journal of the American Geriatrics Society.

“Why do nursing home residents who are cognitively impaired get readmitted to hospitals less often than those released to a community setting? There may be several explanations,” said study first author Arif Nazir, M.D., an assistant clinical professor of medicine at the IU School of Medicine who is on the Board of the American Medical Directors Association. “The nursing home ensures medication adherence, which can be very difficult for cognitively impaired residents who reside at home, even sometimes with support from their families.

“And at home, the physical problems of the cognitively impaired may not be recognized. These are health issues which, if known, would send them back to the hospital.”

“Patients discharged to nursing homes with Alzheimer’s disease and other cognitive impairments may be less physically ill than those who are in a nursing home because of pure physical ailments like heart failure or an infection. The cognitively impaired individuals who end up getting discharged to an institution such as a nursing home typically have social and behavioral issues which these facilities know how to handle,” Dr. Nazir said.

The study demonstrates that cognitive impairment is not independently associated with rehospitalizations and that this relationship is modified by discharge destination. The results provide unique and useful insights regarding the interaction of two important risk factors for the rehospitalization of the elderly population, mental status and the discharge destination.

In both nursing homes and in the community setting, the physical problems of the cognitively impaired may not be recognized.

“In some cases families refuse aggressive care for their loved one, but such care may be harder to do when the older adult is living at home,” said study senior author Malaz Boustani, M.D., MPH, Regenstrief Investigator, associate professor of medicine at the IU School of Medicine and associate director of the IU Center for Aging Research. He also directs the Healthy Aging Brain Center at Wishard-Eskenazi Health. “And when the cognitively impaired individual is being taken care of at home rather than in a facility, the family, like the family of the physically ill patient with a healthy brain, may just feel unable to handle the burden after release from the hospital.”

“To our knowledge,” Dr. Nazir said, “this is the first study to investigate whether discharge destination of older adults makes a difference in rehospitalization rate. Our findings — that it does have an effect — is yet another factor that families and hospital administrators as well as state and national policy makers will want to take into account for many reasons.”

“The fact that odds of rehospitalization are higher if the cognitively impaired individual is sent home from the hospital rather than to a nursing home strongly suggests the importance of developing a personalized transitional care model based on the brain health of older adults as well as the severity of their medical illness,” said Dr. Boustani, the chief innovation and implementation officer at IU Health.

This work was supported by awards from the Health Resources and Services Administration, from the National Institute on Aging of the National Institutes of Health  [R01AG034205, and K23-AG043476], and the John A. Hartford Foundation Center for Excellence in Geriatric Medicine. The content of the study is solely the responsibility of the authors and does not necessarily represent the official views of the funders.