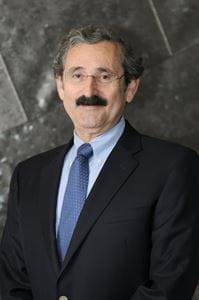 INDIANAPOLIS — An Indiana University cancer researcher has demonstrated that a particular molecule is present in the blood of most pancreatic cancer patients, suggesting it could someday be a diagnostic marker for the disease.

In research published recently in the journal Oncogene, Murray Korc, M.D., the Myles Brand Professor of Cancer Research at the Indiana University School of Medicine and a researcher at the Indiana University Melvin and Bren Simon Cancer Center, showed that an RNA molecule — microRNA-10b, or miR-10b — is present at high levels in the blood of most pancreatic cancer patients. Consequently, miR-10b could serve as a diagnostic marker as well as help physicians determine the disease’s aggressiveness.

Such a marker would be an advance against pancreatic cancer because current treatments typically only extend a person’s life for six to 10 weeks. Pancreatic cancer is difficult to detect and diagnose because there are no noticeable signs or symptoms in the early stages and because the pancreas is hidden behind other organs such as the stomach, small intestine, liver, gallbladder, spleen and bile ducts.

Dr. Korc and colleagues made the discovery after studying biopsies of people with pancreatic cancer. Dr. Korc showed that miR-10b promotes the invasion and growth of pancreatic cancer cells by modulating signaling and gene expression. In particular, the miR-10b facilitates abnormal signaling by allowing the epidermal growth factor receptor, a protein made by many cells in the body and by some types of tumors, to be more efficient. Therefore, the cancer grows and spreads.

Only 6 percent of people with the disease survive more than five years after diagnosis. According to the National Cancer Institute, there will be an estimated 45,220 new cases of pancreatic cancer and 38,460 deaths from the disease in 2013.

Those patients with high levels of miR-10b resist chemotherapy more and their disease returns sooner after treatment than those without the molecule, Dr. Korc added. He said more research is needed, as these findings are preliminary.

Dr. Korc was named the inaugural Myles Brand Professor of Cancer Research in October 2011. The professorship was created to help physicians and scientists at the IU Simon Cancer Center to continue investigating devastating malignancies, such as pancreatic cancer, which claimed the life of Brand, the 16th president of Indiana University. Brand served as IU’s president from 1994 to 2002.

He is also director of the Center for Pancreatic Cancer Research. The center brings together nearly 50 basic scientists and clinicians who work to improve outcomes for pancreatic cancer patients.

Dr. Korc’s focus is on aberrant growth-factor signaling in pancreatic cancer and genetic mouse models of pancreatic cancer, with the goal of designing novel therapeutic strategies. He has published more than 270 peer-reviewed manuscripts, and he is internationally recognized for his seminal contributions to the understanding of the role of the epidermal growth factor receptor and transforming growth factor-beta in pancreatic cancer, work for which he earned a National Institutes of Health MERIT Award. The highly-selective MERIT Awards are presented to researchers who demonstrate superior competence and outstanding productivity in research endeavors.