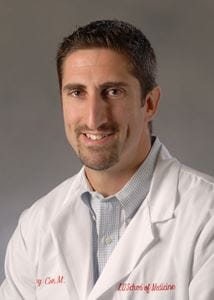 INDIANAPOLIS — Patients who seek treatment from physicians who more frequently perform a high-risk endoscopic procedure are less likely to be admitted to the hospital or require a repeat procedure. Unfortunately, 90 percent of physicians performing these procedures do very few of them.

This is the principal finding of an Indiana University School of Medicine and Regenstrief Institute study published Nov. 18, 2013, in the journal Medical Care reporting the results of 16,968 endoscopic retrograde cholangiopancreatography, or ERCP, procedures performed by 130 Indiana Network for Patient Care physicians from 2001 to 2011.

ERCP is the most complex endoscopic procedure performed by gastroenterologists, with about 500,000 performed in the United States each year.

According to the article “Lower Provider Volume Is Associated with Higher Failure Rates for Endoscopic Retrograde Cholangiopancreatography,” physicians who performed fewer than 117 ERCPs each year were grouped as low providers, and those who performed more were classified as high providers, based on the authors’ analysis. Nearly 90 percent of ERCP providers perform fewer than two ERCPs each week.

ERCP is performed to diagnose and treat conditions of the bile duct and pancreatic duct. Conditions that could necessitate the use of ERCP include gallstones, acute and chronic pancreatitis with a blockage, or an obstruction from a malignant tumor such as pancreatic cancer. The procedure is usually performed under general anesthesia.

Failure rates following the procedure were defined as patients who required a second ERCP or a related procedure, including surgery, within seven days of the first procedure. Other than failure or a complication from the first ERCP, it is exceedingly unlikely that a patient should require a second procedure in such a short time frame.

“Risks of the procedure are essentially doubled with a second ERCP,” said Gregory A. Coté, M.D., M.S., the paper’s first author and an assistant professor of medicine at the Indiana University School of Medicine Division of Gastroenterology and Hepatology. Those risks include tearing of the intestinal wall, pancreatitis, internal hemorrhage, complications from anesthesia, and infections. “Having two interventions in such a short time span induces substantial anxiety for patients and their loved ones, and the implications on health care costs are clear. In a fee-for-service reimbursement structure, there is little incentive to minimize or eliminate these repeat procedures.”

Using data collected by the Regenstrief Institute, Dr. Coté and colleagues found that 116 of the 130 doctors surveyed did two or fewer ERCPs a week, or fewer than 117 ERCPs per year. In that low-volume group, nearly 10 percent of patients needed a second procedure within seven days.

In the high-volume group — physicians who performed more than 117 ERCPs per year — and even after accounting for the fact that ERCPs performed by these providers were typically for more complex indications, there was a 6 percent incidence of repeat procedures within seven days of the initial procedure. The data showed that as the number of procedures performed by a physician increased, the failure rate decreased. Physicians who perform more than 117 ERCPs per year had similar failure rates, suggesting this as an approximate threshold for a provider to maintain technical proficiency.

He said there has been little effort to concentrate ERCP services at fewer hospitals, unlike some high-risk surgical procedures such as pancreatic surgery. At a time when health care costs are under the microscope, this research, funded by the National Institutes of Health, presents compelling reasons to rethink how and where ERCP is provided.

“The bottom line from the paper is that we have established and quantified a correlation between provider volume and outcomes from endoscopic retrograde cholangiopancreatography,” Dr. Coté said. “This is the most complex endoscopic procedure performed by gastroenterologists, yet it is the minority of ERCP providers who do the procedure frequently — and their outcomes are superior to low-volume providers. This has critical implications for health care system costs, medical quality and patient advocacy.”

One of the recommendations made by the authors was that quality improvement guidelines and a more stringent credentialing process be established for ERCP, similar to those established for colonoscopy and some surgical procedures that resulted in better outcomes for patients and lower health care costs. Systematic reporting of outcomes at the hospital and provider level — including failure and complication rates — will help inform patients of the best environments in which to undergo ERCP.