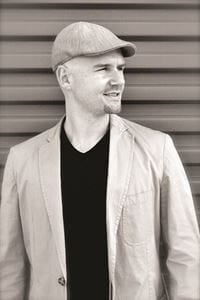 INDIANAPOLIS – Josh Green, a former IUPUI English M.A. student and author of the new short story collection “Dirtyville Rhapsodie,” will kick off the Fall 2013 Rufus & Louise Reiberg Reading Series when he returns to campus for a free reading on Thursday, Sept. 26 at 7:30 pm in the University Library Lilly Auditorium.

“Dirtyville Rhaposodies,”published this past spring by Dionysus Books, has garnered considerable praise since its release. Paste Magazine wrote “Josh Green reports from the literary homeland with a lion’s heart and a steady hand” while Men’s Health Magazine named the book on of the “Best Books for the Beach.”

The 18 stories in the collection focus on dark and comic troubles of everyday people. Green drew from his experience as a freelance journalist and crime beat reporter, and also his experiences living in Indiana’s Decatur County.

“We’re excited to have Josh Green back on campus not only because his book is getting such positive reviews but to show our students what someone can do with the time they spent in the IU School of Liberal Arts at IUPUI,” says Terry Kirts, senior lecturer in English and director of the Reiberg Reading Series. “Josh has made a successful career by writing in a variety of genres for various media, which is a great example for all students of writing at IUPUI.”

Rounding out the fall series is poet Orlando Ricardo Menes, director of the creative writing program at the University of Notre Dame, on Thursday, Oct.17 at 7:30 p.m. in the University Library Lilly Auditorium. He is the author of three books of poetry, including the recently released collection “Fetish,” which won the Prairie Schooner Book Prize in Poetry. His work has appeared in journals such as Ploughshares, the Indiana Review, Callaloo, and Spoon River Poetry Review. He is also the editor of two anthologies including “The Opening Light: Poets from Notre Dame, 1991-2008.” Menes will also judge the 2013 IUPUI Poetry Contest.

The Rufus & Louise Reiberg Reading Series is sponsored by the Department of English in the IU School of Liberal Arts at IUPUI and is made possible by the generous support of the Reiberg family, the IUPUI Office of Academic Affairs, University College, and the University Library.