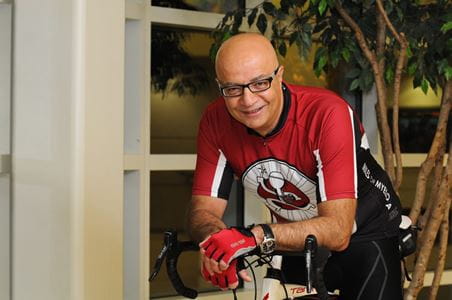 Rafat Abonour, M.D., professor of medicine and of pathology and laboratory medicine at the IU School of Medicine and a researcher at the Indiana University Melvin and Bren Simon Cancer Center, wrapped up his ninth annual Miles for Myeloma in downtown Indianapolis on Saturday, Sept. 28.

He and a group of fellow cyclists began in Niles, Mich., the day before. Their route this year took them to South Bend, LaPorte and Monticello before ending in Indianapolis.

Since 2005, Dr. Abonour has taken on a grueling ride — and sometimes a bike ride plus a long-distance run — to raise funds and awareness of multiple myeloma, an incurable blood cancer. In all, he has biked and run more than 1,500 miles and raised more than $2 million for research at the IU Simon Cancer Center.

A person with myeloma, according to Dr. Abonour, is typically around 60 years old. The cancer accumulates in bone marrow, weakening the bones and causing osteoporosis, anemia and kidney failure. Myeloma also leaves people susceptible to infections because their immune system has been weakened.

“We have to do more for people diagnosed with myeloma,” Dr. Abonour said. “It’s so disheartening that we can’t cure these people. I think the mission is to find out why we can’t cure them — and change that.”