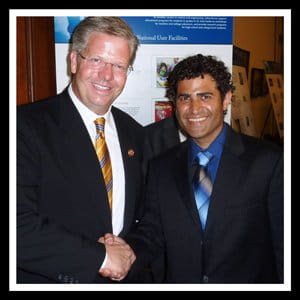 INDIANAPOLIS – A Ph.D. student in the Department of Physics at IUPUI spoke recently before members of the U.S. Congress to explain the value of supporting national research facilities that drive innovation in science and technology.

Luis Palacio was the only student from Indiana to participate in the 2013 Scientific Research Facility Exhibition, hosted by the House of Representatives’ Science and National Labs Caucus and the National User Facility Organization. Through discussion and research presentations, members of Congress and their staff learned of recent advances in areas such as energy, health and innovative technologies.

Palacio, a research assistant in the biophysics lab of Horia Petrache, associate professor of physics, said the experience allowed him to discuss the impact research has had on his education as well as opportunities created through IUPUI’s connection to the Oak Ridge National Laboratory in Tennessee, one of the world’s foremost facilities for the study of materials.

“Through science research, I’ve found a way to contribute to problem solving and discovering new ways of improving our living conditions and our environment,” he said.

Palacio researches the structure of proteins. Oak Ridge is home to the Spallation Neutron Source, which provides the most intense pulsed neutron beams in the world for scientific and industrial research and development. The equipment allows researchers with the most detailed look ever into small samples of physical and biological matter. The facility hosts more than 2,000 visiting scientists each year.

“User facilities like those at Oak Ridge are vital resources for our research,” said Andy Gavrin, chair of the Department of Physics in the School of Science at IUPUI.

The June 26 exhibition in Washington, D.C., featured posters and presentations from a wide array of scientists and students. Palacio’s past participation in IUPUI’s GK-12 Urban Educators Program, which places M.S. or Ph.D. students in creative learning environments in Indianapolis public schools, helped him translate the applications of his research to an unfamiliar audience, he said.

“I was able to explain my research at different levels and relate its importance to relevant national issues,” Palacio said.

“From this experience, one thing was very clear to me,” Palacio said. “The legislators want to learn more about successful programs in science. They would like to better understand how discoveries are made, what kind of technologies are being tested and how research is helping to solve issues in health, defense, energy, the environment, communications and more.”