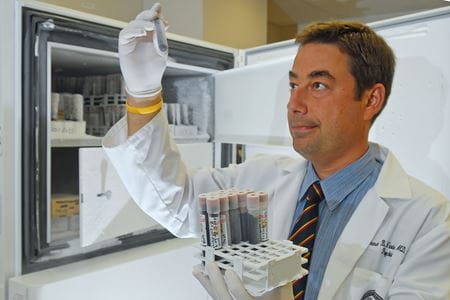 INDIANAPOLIS — Indiana University School of Medicine researchers have found a series of RNA biomarkers in blood that may help identify who is at risk for committing suicide.

In a study reported Aug. 20 in the advance online edition of the Nature Publishing Group journal Molecular Psychiatry, the researchers said the biomarkers were found at significantly higher levels in the blood of both bipolar disorder patients with thoughts of suicide as well in a group of people who had committed suicide.

Principal investigator Alexander B. Niculescu III, M.D., Ph.D., associate professor of psychiatry and medical neuroscience at the IU School of Medicine and attending psychiatrist and research and development investigator at the Richard L. Roudebush Veterans Affairs Medical Center in Indianapolis, said he believes the results provide a first “proof of principle” for a test that could provide an early warning of somebody being at higher risk for an impulsive suicide act.

“There are people who will not reveal they are having suicidal thoughts when you ask them, who then commit it and there’s nothing you can do about it. We need better ways to identify, intervene and prevent these tragic cases,” he said.

Over a three-year period, Niculescu and his colleagues followed a large group of patients diagnosed with bipolar disorder, completing interviews and taking blood samples every three to six months. The researchers conducted a variety of analyses of the blood of a subset of participants who reported a dramatic shift from no suicidal thoughts to strong suicidal ideation. They identified differences in gene expression between the “low” and “high” states of suicidal thoughts and subjected those findings to a system of genetic and genomic analysis called Convergent Functional Genomics that identified and prioritized the best markers by cross-validation with other lines of evidence.

The researchers found that the marker SAT1 and a series of other markers provided the strongest biological “signal” associated with suicidal thoughts.

Next, to validate their findings, working with the local coroner’s office, they analyzed blood samples from suicide victims and found that some of same top markers were significantly elevated.

Finally, the researchers analyzed blood test results from two additional groups of patients and found that high blood levels of the biomarkers were correlated with future suicide-related hospitalizations, as well as hospitalizations that had occurred before the blood tests.

“This suggests that these markers reflect more than just a current state of high risk, but could be trait markers that correlate with long term risk,” said Dr. Niculescu.

Although confident in the biomarkers validity, Dr. Niculescu noted that a limitation is that the research subjects were all male.

“There could be gender differences,” he said. “We would also like to conduct more extensive, normative studies, in the population at large.”

In addition to extending the research to females to see if the same or other markers come into play, Dr. Niculescu and colleagues plan to conduct research among other groups, such as persons who have less impulsive, more deliberate and planned subtypes of suicide.

Nonetheless, Dr. Niculescu said, “These seem to be good markers for suicidal behavior in males who have bipolar mood disorders or males in the general population who commit impulsive violent suicide. In the future we want to study and assemble clinical and socio-demographic risk factors, along with our blood tests, to increase our ability to predict risk.

“Suicide is complex: in addition to psychiatric and addiction issues that make people more vulnerable, there are existential issues related to lack of satisfaction with one’s life, lack of hope for the future, not feeling needed, and cultural factors that make suicide seem like an option.”

He said he hopes such biomarkers, along with other tools, including neuropsychological tests and socio-demographic checklists currently in development by his group, ultimately can help identify people who are at risk, leading to pre-emptive intervention, counseling, and saved lives.

“Over a million people each year world-wide die from suicide and this is a preventable tragedy”.

A short video interview of Dr. Niculescu discussing this research is available on Youtube: http://youtu.be/2y00BWvglJw