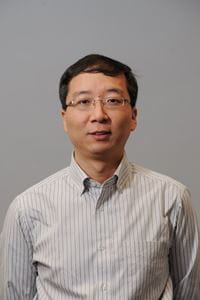 INDIANAPOLIS – A research scientist with expertise in high-performance, cluster computing will join the Department of Computer and Information Science at Indiana University-Purdue University Indianapolis this fall.

Fengguang Song joins the School of Science from the Samsung Research Center in California, where he worked as a senior researcher. At Samsung, he was tasked with developing the next generation of highly scalable operating systems based on emerging cloud-computing technologies. He will serve as an assistant professor at IUPUI.

“I love IUPUI’s beautiful campus, and I look forward to the opportunity to work with a group of talented computer science faculty,” Song said. “My experience in high-performance computing will benefit several areas of research in the department, including data mining, imaging, visualization and more. I look forward to collaborating on inter-disciplinary projects to solve large-scale scientific problems.”

Song also held several roles with the Innovative Computing Laboratory at the University of Tennessee in Knoxville, where he earned his Ph.D. in computer science. As part of his post-doctoral work there, Song worked to develop algorithms for large-scale, multicore, cluster computing systems.

“Dr. Song is an expert in high-performance computing with extensive experience in cloud computing, graphic processing unit technologies and large-scale scientific computing,” said Shaiofen Fang, chair of the Department of Computer and Information Science. “He will join the high-performance computing group and help bring it to real scientific domains through the newly established School of Science Institute for Mathematical Modeling and Computational Science.”

The National Science Foundation has recognized Song’s research. He also has served as a reviewer for several industry publications and conferences, including the Journal of Parallel and Distributed Computing, the Journal of Supercomputing and the IEEE/ACM International Symposium on Cluster, Cloud and Grid Computing.

About the School of Science at IUPUI

The School of Science is committed to excellence in teaching, research and service in the biological, physical, behavioral and mathematical sciences. The school is dedicated to being a leading resource for interdisciplinary research and science education in support of Indiana’s effort to expand and diversify its economy.