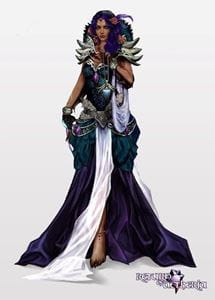 The game, “Return of Aetheria: A game by the Media Arts and Science program at the IU School of Informatics and Computing at IUPUI,” uses video mapping and projectors that will create a large crystalline display; stereoscopic 3-D; a smartphone app; the entire convention center as a play area; and costumed actors portraying characters.

“Return of Aetheria” was developed as a result of an educational partnership between the Media Arts and Science program and Gen Con, one of the largest gaming conventions in the world. Known for introducing revolutionary gaming to the public, the annual convention has taken place in Indianapolis since 2003, attracting 40,000 visitors in 2012. Gen Con 2013 takes place Aug. 15 to 18 at the Indianapolis Convention Center.

The IUPUI students and faculty worked eight months on the project, crafting a game based on the theme of an epic quest to restore magic to the world. The app will guide players through various quests.

As quests are completed, players will see the results on the large crystalline display in real time through video mapping projectors. As the game continues, more and more dramatic events will appear on the crystalline structure and surrounding space.

The Media Arts and Science program has partnered with several businesses — including Mayfair Games, one of the largest board games companies in the world — to offer players $3,000 worth of prizes.

“We are combining several unique levels of technology and game design to create this experience,” said Mathew Powers, a lecturer in the IUPUI Media Arts and Science program and the project’s leader. “This has never been attempted before at this level, and we will demonstrate what the heck we can do, because I think we do some amazing things here.”

The partnership between Gen Con and the Media Arts and Science program brings together an event committed to the advancement of play and gaming and an academic program dedicated to the creation and production of games, Powers said.

Since the partnership was established last year, the Media Arts and Science program has added two classes, one on pre-production and the other on production of games, Powers said. While students learn how to create games, he said, perhaps most importantly they gain what potential employers want: the real-world experience of actually doing it.

The project has involved 3-D and 2=D artists, video mapping, animators, computer programmers, and narrators and actors who will be costumed and role playing as part of the game.

“We are blurring the lines between reality and the game through the use of cutting-edge technology,” Powers said. “Having the entire convention center space act as our play area will bring an uncanny gaming experience to all our players.”

Three students and a faculty member will don costumes and play game characters. They are student Robert Lastinger as Ah K’in, the Fire Champion; student Brittnee Thompson as Irisi, the Air Champion; professor Albert William as Espir, the Spirit Champion; and student Elspeth Eastman as a mystery character.

Faculty who have assisted with the project are Todd Shelton and Travis Faas, who worked on programming; Albert William, who worked on 3-D; Thomas Lewis, who worked on video/media; and Joseph Defazio, director of the school’s Media Arts and Science program.

Other students and students who graduated who contributed to the project are Brittney Conway, who has been the project’s dedicated assistant; Adam Glasscock, video mapping expert; and Kathryn Steele, art lead.

Powers plans to have students add on to the game each year, creating new versions for display at other conventions.