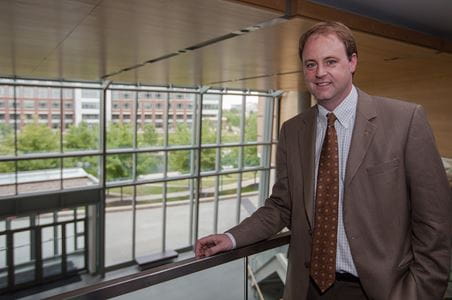 INDIANAPOLIS — Researchers have blocked the progression of type 1 diabetes among newly diagnosed patients using a drug originally sold to treat psoriasis, according to the results of a clinical trial reported Saturday at a scientific meeting in Chicago.

In a multi-center trial of 49 patients, those receiving the drug alefacept were producing the same amount of insulin one year after diagnosis, while patients receiving a placebo injection were producing less, consistent with the deterioration that usually occurs after diagnosis with the disease. The results were announced at the American Diabetes Association Scientific Sessions.

If the results are borne out in larger studies, the drug could enable type 1 diabetics to maintain some insulin production and avoid the debilitating complications caused by the disease, said Mark R. Rigby, M.D., Ph.D., associate professor of pediatrics at the Indiana University School of Medicine.

“These are extremely promising results and offer hope that the progression of type 1 diabetes can be stopped or significantly slowed by a drug that was well-tolerated, without serious adverse events,” said Dr. Rigby, principal investigator for the trial.

Type 1 diabetes occurs when the body’s immune system attacks beta cells in the pancreas that produce the insulin needed to metabolize sugars and other nutrients into energy needed by the body. The process usually continues until the patient is producing little or none of his or her own insulin, requiring regular injections of insulin to maintain blood sugar levels at close to normal levels.

Nearly 3 million people are estimated to have type 1 diabetes in the United States. Although the disease can be managed with insulin injections, it cannot be reversed or cured. Long-term complications can include visual impairment, heart disease, stroke, problems in the extremities leading to amputation and other issues.

Alefacept is an immunosuppressant drug that binds to and interferes with the actions of certain immune system T-cells that are believed to be involved with the destruction of beta cells in the pancreas.

A year after receiving the initial injections, the study participants were tested for insulin production using a standard mixed meal tolerance test, or “shake test.”

The participants will continue to be tested until two years after starting treatment. The additional testing may reveal whether the alefacept treatments have resulted in “re-education” of the immune system so that patients would not need further treatments with the drug, Dr. Rigby said.