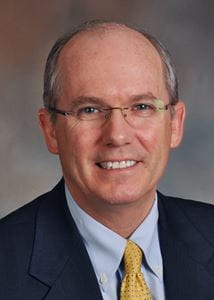 As chief of staff, Dean will serve as an advisor to Bantz and the campus’ senior leadership team on strategies and priorities, as well as oversee IUPUI’s intercollegiate athletics.

“Jeff will bring distinctive talents to the role, including academic and executive leadership and interpersonal skills honed by decades of experience in clinical practice,” Bantz said.

An IU faculty member since 1985, Dean is the Ralph E. McDonald Professor of Pediatric Dentistry and professor of orthodontics at the School of Dentistry and Riley Hospital for Children at IU Health. He is also a part-time practitioner of pediatric dentistry and orthodontics in Indianapolis. In January 2012, Dean accepted an appointment as executive director of the American Board of Pediatric Dentistry, which serves as the governing body for about 3,100 pediatric dentists who have attained certification, the specialty’s most advanced level of training.

In addition to Dean receiving his Doctor of Dental Surgery and Master of Science degrees from the IU School of Dentistry, he also holds a Bachelor of Science in biochemistry from Purdue University