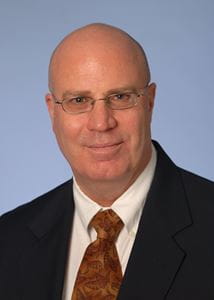 An Indiana University cancer researcher and his Canadian collaborator have discovered how normal breast precursor cells may be genetically vulnerable to developing into cancer.

David Gilley, Ph.D., associate professor of medical and molecular genetics at the IU School of Medicine and a researcher at the Indiana University Melvin and Bren Simon Cancer Center, and Connie Eaves, Ph.D., of the Terry Fox Laboratory, BC Cancer Agency in Vancouver, Canada, identified a rare and critical subset of normal human breast cells, luminal progenitors, that possess extremely short chromosome ends known as telomeres.

Telomeres are the very end regions of chromosomes that serve as protective caps to prevent DNA-damaging events such as fusion of the end of one chromosome with the end of another.

Dr. Gilley said the telomere’s lengths in the luminal progenitors that were studied are “dangerously short,” leaving the ends of the chromosomes unprotected and potentially leading to the development of breast cancer. The short telomeres also displayed DNA damage markers at chromosome ends, further suggesting that luminal progenitors may be vulnerable to genetic changes leading to malignancy.

“Several lines of evidence suggest that luminal progenitors are the cell of origin of many breast cancers,” Dr. Gilley said. “These findings suggest new genetic indicators for identifying women at higher risk for breast cancer and provide insights into potential new strategies to detect, treat and prevent the disease.”

The research is published in the June 4 inaugural issue of Stem Cell Reports.

The researchers examined telomere length by isolating subsets of cells directly from normal tissue samples obtained from donors who had undergone breast reductions. By isolating rare individual types of cells such as stem and progenitor cells, the researchers examined their genetic characteristics, which yielded information about a cell’s potential vulnerability to developing cancer.

Dr. Gilley and his laboratory colleagues are working on ways to improve early detection of breast cancer by studying both blood and tissue tests that may identify genetic changes associated with cancer. The earlier breast cancers are detected, especially before the cancer moves out of the breast, the better treatment outcomes are. For example, it is likely that a simple blood test will eventually be developed to identify women at risk for developing breast cancer, according to Dr. Gilley.

This new research highlights the importance of investigating different cell types in normal human tissues to understand the cellular origin of cancer and the factors that may contribute to its development.

“An immediate use of our study will be to look into other human epithelial tissues to see if this finding is unique to the breast or a more general phenomenon,” Dr. Gilley said.

The research was made possible by the Susan G. Komen Breast Cancer Foundation and the Avon Foundation for Women.