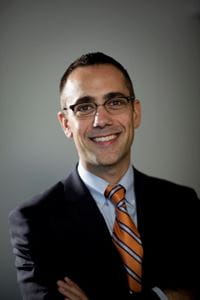 INDIANAPOLIS — Indiana University School of Nursing recently honored three outstanding alumni for their contributions to the school and the field of nursing.

The recipients of the 2013 alumni awards are Chad Priest, Margaret Applegate and Sue Easter Idczak. They were honored during the IU School of Nursing Alumni Recognition Luncheon on May 18 at the NCCA headquarters.

Priest received the Excellence in Nursing Award, presented annually to a School of Nursing alumna or alumnus who has graduated within the past 10 years and has made significant contributions to the clinical practice of nursing.

Priest is the CEO at MESH Inc., a nonprofit coalition that enables health care providers to respond effectively to emergencies and remain viable through recovery. Priest, an attorney, practiced public and health care law in the Indianapolis and Washington offices of Baker and Daniels before joining MESH. He also served as a family practice primary care optimization nurse with the U.S. Air Force.

Priest earned his bachelor’s and master’s degrees from the IU School of Nursing. He holds a law degree from The George Washington University Law School in Washington, D.C.

Applegate, a professor and assistant dean emerita of nursing at Indiana University, received the Special Recognition Award in recognition of her significant contributions of time, energy and aid to the growth and development of the nursing school and its alumni.

Since joining the IU School of Nursing as a faculty member in 1966, Applegate has taught emergency nursing, pediatric nursing and administration of higher education programs in nursing. In addition, she has developed and taught health care ethics courses for the degree program. She earned her bachelor’s, master’s and doctoral degrees from IU.

The School of Nursing presented its Distinguished Alumni Award to Idczak in honor of her national recognition for significant professional and academic contributions to the field of nursing.

Idczak is the director of nursing at Siena Heights University in Adrian, Mich. She earned her bachelor’s and master’s degrees from the IU School of Nursing and her Ph.D. in higher education from the University of Toledo.

After practicing as a cardiac clinical nurse specialist for many years, Idczak began teaching undergraduate nursing at the former Medical College of Ohio (now University of Toledo) in 1996. During that time, she earned multiple teaching awards from the student body. She has been involved in curriculum development in undergraduate education at the Medical College of Ohio (1996-2005) and in graduate nursing education at Lourdes College (2005-07). She is currently creating both an RN-BSN and a pre-licensure nursing program at Siena Heights University. In addition to her teaching and curriculum development work,

Idczak has published widely and presented at conferences across the country.