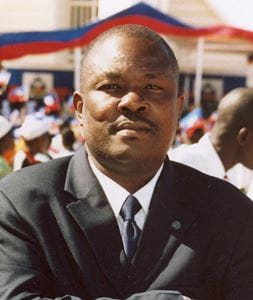 INDIANAPOLIS — A finalist for one of the world’s most prestigious human rights awards will deliver the 2013 commencement address for graduates of the Indiana University Robert H. McKinney School of Law.

Haitian attorney Mario Joseph will deliver the address during the ceremony at 2 p.m. Saturday, May 11, in the Sagamore Ballroom of the Indiana Convention Center in downtown Indianapolis. The school is awarding three Doctor of Juridical Science degrees, 23 Master of Laws degrees and 265 Doctor of Jurisprudence degrees.

During his more than 20 years of human rights work, Joseph has spearheaded historic cases, including the Raboteau Massacre trial in 2000, hailed as one of the most important human rights cases ever in the Western Hemisphere, and Yvon Neptune v. Haiti, the first Haiti case ever decided by the Inter-American Court of Human Rights.

“It is an incredible honor and privilege to have as our graduation speaker someone who is a giant in the worldwide fight for human rights and who brings great honor and pride to the legal profession,” said IU McKinney School of Law Dean Gary R. Roberts. “(Joseph) truly is an inspiration and will make this a special day.”

The jury for the Martin Ennals Award for Human Rights Defenders announced Joseph as one of three finalists on April 24. The winner will be announced at an awards ceremony in Geneva in October.

The Martin Ennals Award is known as “the award of the human rights movement” because its winner is determined by a jury consisting of 10 of the world’s leading human rights non-government organizations, including Amnesty International, Human Rights Watch, the International Federation of Human Rights and Human Rights First.  The award is presented annually to an individual who has demonstrated an exceptional record of combating human rights violations by courageous and innovative means, and whose exemplary work has put him or her at great personal risk.

As managing attorney of the Bureau des Avocats Internationaux, Joseph has fought bravely and successfully for victims of human rights abuses in a range of politically sensitive cases. He has pioneered a “victim-centered approach,” combining traditional legal representation with capacity building and political strategies that advance the interests of the clients’ organizations and communities and maximize cases’ positive impact on broader Haitian society.

About the Indiana University Robert H. McKinney School of Law

With more than 1,000 students, IU Robert H. McKinney School of Law is the largest law school in Indiana. Located in downtown Indianapolis on the Indiana University-Purdue University Indianapolis campus,  the school has enjoyed great success in preparing students for legal careers for more than 100 years, as evidenced by the presence of alumni in the judiciary and other branches of government, business, civic leadership and law practice. The school’s 10,000 graduates reside in every state in the nation and several foreign countries. More information is available at indylaw.indiana.edu.