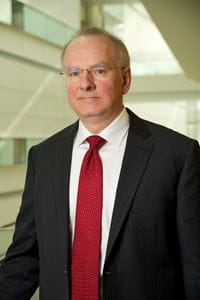 INDIANAPOLIS — Dr. Jay L. Hess, currently the Carl V. Weller Professor and chair of the Department of Pathology and professor of internal medicine at the University of Michigan Medical School, has been selected as the new vice president for university clinical affairs and dean of the Indiana University School of Medicine, subject to the approval of the IU Board of Trustees at its June meeting.

Upon board approval, Hess, 53, will become the 10th dean in the School of Medicine’s 110-year history and the first dean in the past five appointments to come from outside IU. Hess will succeed Dr. D. Craig Brater, who is retiring June 30 after 13 years as dean and 27 years at IU. Hess is expected to begin his new duties Sept. 1.

In announcing the appointment, IU President Michael A. McRobbie praised Hess’ record as a medical researcher, teacher and practitioner, noting that Hess was selected from a national field of more than 50 external and internal candidates.

“The search committee was extremely rigorous in its effort to find and evaluate the type of top-flight talent IU needs to continue to strengthen the School of Medicine and our clinical affairs operations, and Dr. Hess rose to the top of an extremely competitive field of candidates,” McRobbie said.

“In addition to holding a leadership position at one of the nation’s finest health systems, Dr. Hess is a recognized expert in pathology as well as on genetic and molecular changes that lead to cancer. He also brings significant administrative experience to this role, which will be invaluable given the size and complexity of IU’s health-related operations.”

Hess joined the highly acclaimed University of Michigan Medical School — currently ranked eighth nationally by U.S. News and World Report — in 2005 after holding faculty and clinical roles at the University of Pennsylvania Health System and Washington University School of Medicine in St. Louis.

Under Hess, U-M Medical School’s Department of Pathology has seen its level of research funding from the National Institutes of Health increase dramatically, now ranking seventh nationally among academic health systems. Hess also has grown the department over the past eight years through the addition of more than 40 faculty members — most of them recruited from other elite academic health systems.

“I am honored to be selected to lead the Indiana University School of Medicine and serve as vice president for university clinical affairs,” Hess said. “This is a crucial time for academic medical centers as they transform themselves to better pursue their clinical, research and educational missions, while also playing an increasing role in promoting health and economic development of the larger community.”

Dan Evans, president and CEO of IU Health, which has a strong partnership with the IU School of Medicine, praised Hess’ selection.

“We are fortunate to recruit Dr. Hess as the newest leader of the IU School of Medicine,” said Evans, who was on the search committee. “Jay is a nationally recognized leader in medical research, education and clinical care. IU Health eagerly anticipates his leadership as we continue to work toward our common goals of improving the health and lives of residents across Indiana.”

In addition to serving as chair of the pathology department for U-M Medical School, Hess is the U-M Health System’s director of clinical laboratories and its director of sponsored research. He has led several institutional initiatives during his tenure at the university, including serving as director of strategy implementation for the U-M Health System’s personalized health program; chair of a task force to revise the U-M Medical School’s funds flow model and chair of a provost’s committee to review the university’s Life Sciences Institute.

He also is co-founder and chairman of the Board of Paradigm, a sequencing-based diagnostics company that is a joint venture between the University of Michigan and the International Genomics Consortium.

Hess played a leadership role in the university’s work to purchase the former Pfizer Research and Development Center in Ann Arbor, Mich., in 2009, two years after the pharmaceutical company had announced its closure. He served as the chairman of the committee that developed the financing plan for the 2.2 million-square-foot facility and currently chairs the finance committee for what has become the university’s newest medical campus.

Hess said he hopes to build on IU’s existing strength in the health sciences and the improvements made at the medical school under Brater.

“The School of Medicine has had strong leadership under Dean Brater,” Hess said. “With its outstanding faculty and staff, close affiliation with IU Health and the strong leadership and support of the president, trustees, business community and the state, Indiana University is well poised for further excellence and national visibility in all of its missions. I look forward to working with all of my colleagues to make that vision a reality.”

As vice president for clinical affairs, Hess will report to McRobbie and serve as a member of his cabinet. In this role, Hess will coordinate the clinical, educational and operational activities across all of IU’s health sciences disciplines, such as nursing, dentistry, optometry, social work, public health, and health and rehabilitation sciences.

This position also recognizes that the IU School of Medicine is a multi-campus, statewide enterprise and a key partner in IU Health, one of the top-ranked hospital systems in the nation, and IU Health Physicians. It also has major educational and clinical relationships with Wishard/Eskenazi Health and the Roudebush VA Medical Center. It is expected to take an increasing role in life-sciences-based economic development in Indiana, especially with the proposed Biosciences Research Institute.

“With medical education centers in Bloomington, Evansville, Fort Wayne, Muncie, Gary, South Bend, Terre Haute and West Lafayette, as well as relationships with IU Health and other major hospitals in the state, the impact of the IU School of Medicine in Indiana is enormous, as is that of our other highly regarded health science schools, making the vice president for university clinical affairs role critical to our ongoing success,” McRobbie said. “I am confident that Dr. Hess will work effectively with the deans of all our health sciences schools and medical education centers across the state to build on the strong foundation laid by Craig Brater in this role.”

In his role as dean, Hess will report to IU Executive Vice President and IUPUI Chancellor Charles R. Bantz. The IU School of Medicine serves nearly 1,700 students in Indianapolis and at eight regional campuses across Indiana, and includes 1,500 faculty members and 2,200 physicians working at IU and IU Health facilities in Indiana. Approximately half of all the physicians in Indiana have received at least part of their medical school education at IU.

The School of Medicine, the only medical school in Indiana, offers more than 60 clinical departments and specialty programs for its students. It also is the academic partner for IU Health, as well as Wishard/Eskenazi Health, the Roudebush VA Medical Center and Larue D. Carter Memorial Hospital.

“Dr. Hess brings to IU’s medical school innovative leadership, academic excellence, a thoughtful style and experience at leading medical schools. His leadership is collaborative and creative. Jay demonstrated he knows how to work effectively in a dramatically changing environment for health care and research,” Bantz said. “I am confident Jay can help leverage the strengths of the School of Medicine and the other life science programs at IUPUI with our partners in Indiana to secure Indiana’s place as a top-five life sciences state.”

IU School of Dentistry Dean John Williams, who chaired the search committee, said Hess’ “unique blend of academic excellence, entrepreneurial prowess and strategic experience” helped him stand out from a strong field of candidates drawn to the position because of the “rich history and tradition of excellence at the IU School of Medicine.”

Chuck Schalliol, senior advisor at the Indianapolis law firm of Faegre Baker Daniels and chair of the external advisory committee for the search, echoed Williams’ praise of Hess, adding: “Dr. Hess brings outstanding credentials to the dean’s position and can clearly help the school continue its climb to pre-eminence. Dr. Hess’ commitment to further strengthening the Indiana life science community was particularly important to the advisory committee.”

Hess, who has published and presented frequently throughout his career, serves on the editorial boards of a number of pathology- and hematology-related journals. He also currently is the principal or co-investigator on three research projects related to leukemia and has been directly or indirectly involved in nearly two dozen sponsored research projects during his career. Hess’ full curriculum vitae is available online.

He trained in anatomic pathology, surgical pathology and hematopathology at Brigham and Women’s Hospital/Harvard Medical School in Boston. Additionally, he earned a certificate in business administration from the Wharton School of the University of Pennsylvania and a master’s degree in Health Services Administration from the University of Michigan School of Public Health in 2012.