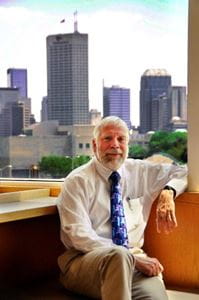 Academic Libraries of Indiana installed Lewis as president during the organization’s 10th annual meeting in early May. Established in 2003, Academic Libraries of Indiana is dedicated to improving Indiana’s information infrastructure and supporting economic development by making the scholarly record accessible in support of grants, contracts, projects, entrepreneurial ventures and government initiatives.

One focus of Lewis’ tenure as president will be to oversee a large-scale project to study print book use in Indiana academic libraries. The intent is to identify redundant and little-used titles that might be withdrawn to create space for other more important purposes, such as collaborative learning environments where students can consult with librarians and each other.

“As dean of the University Library at IUPUI, David Lewis has been on the leading edge of the transformation of libraries to improve their contribution to student success, faculty scholarship and community engagement,” said IUPUI Chancellor Charles R. Bantz. “He is nationally recognized and respected among academic librarians for leadership, innovation and collaboration.”

Students at schools and colleges across Indiana learn how to identify, access, evaluate and apply information through their libraries. This type of learning, sometimes called “information literacy,” is a key program area for Academic Libraries of Indiana and prepares students for democratic citizenship and success in the workplace.

IUPUI University Library is engaged in most programs of the Academic Libraries of Indiana, whose activities include developing collaborative strategies for resource sharing and the cooperative acquisition of electronic resources.

“Academic Libraries of Indiana is a great collaboration of all of Indiana’s academic libraries,” Lewis said.  “All academic institutions from Ivy Tech to colleges to research institutions are represented, and we all pull together to make what libraries do for students and faculty better.  The result is improved service and a better value for all of Indiana’s colleges and universities.”

Lewis came to IUPUI in 1993 from the University of Connecticut, where he was head of Research and Information Services. He became dean of the University Library in 2000. In 2009, Lewis accepted the additional responsibility of assistant vice president for digital scholarly communications. His role is to advance Indiana University’s programs in digital scholarship and advocate for improved forms of scholarly communication that make academic research more open and accessible; he has also worked on IU’s e-textbook initiative.

Located at 755 W. Michigan Ave. on the IUPUI campus, the University Library is a public library, serving nearly 1 million visitors a year, 10 percent of them community users. University Library supports students and faculty across all of IUPUI’s more than 200 degree programs with research expertise and a wide array of resources. Resources include signature collections like the Joseph and Matthew Payton Philanthropic Studies Library, the Ruth Lilly Special Collections and Archives, the Herron Art Library and over 60 digital collections.