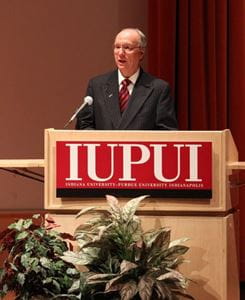 Three special awards are given out at the annual event: the Christine Jakacky Mentor of the Year Award, the Tonja Eagan Award and the Chancellor’s Scholar award.

The Christine Jakacky Mentor of the Year Award is given to the mentor who has gone above and beyond his or her mentoring responsibilities, demonstrated leadership and shown high academic achievement. This year’s recipient is Brittany Collins, a junior psychology major in the Purdue School of Science at IUPUI.

Henry “Hank” Hernandez, a lecturer in the Department of Mathematical Sciences and the former interim director of the Mathematics Assistance Center, won the Tonja Eagan Award. As interim director of the math center, Hernandez was an inspirational leader and mentor for his staff and provided an effective learning environment to all the students who benefited from math tutoring.

The Chancellor’s Scholar is chosen from a group of students nominated from each IUPUI school based on academic excellence and high engagement with the IUPUI campus. This year’s recipient of this prestigious award is Shelby Colglazier, an IUPUI Honors College Scholar.

Awards also were presented to 36 students in the following categories: University College First-Year Seminar Outstanding Students, University College department awards, and the Evenbeck Scholars Mentors of the Year awards. These students were recognized for the perseverance they have shown while pursuing their educational goals and for their dedication to the IUPUI campus as both students and staff.