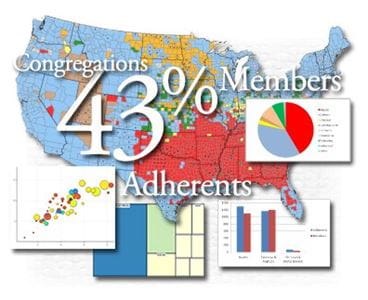 The Polis Center, a research center of the IU School of Liberal Arts at Indiana University-Purdue University Indianapolis, invites scholars and researchers to explore the Digital Atlas of American Religion, a new website for the study of America’s multi-dimensional religious life within a geographical and multimedia framework.

The American religious landscape has always been complex, with many denominations and faith traditions competing for members. Traditional GIS technology does not support the easy exploration and visualization of such complex data. For instance, it typically shows only the dominant religious group in a county even though dozens or even hundreds of such groups may exist within the same geographic space.

The Digital Atlas of American Religion, to be known as DAAR, overcomes this limitation by providing advanced tools and methods that capture multi-dimensional data in ways that are more visually dynamic and easily interpreted.

With DAAR, users can explore and visualize data via maps, cartograms, tree maps, pie charts and motion charts to reveal patterns, trends and relationships that otherwise are not apparent with traditional GIS.

“We want students, researchers and anyone with interest in American religion to see how much variety exists across the United States among denominational and faith traditions,” said David Bodenhamer, executive director of The Polis Center. “We invite them to examine how patterns of adherence change within and among states and to see how these patterns have changed over time. Unlike the simplistic red state-blue state maps that dominate election coverage, DAAR presents the user with a rich and varied landscape of faith and practice. In making this complex world accessible within a GIS, DAAR has created new and better tools for students and researchers alike.”

DAAR allows scholars to understand the multiple dimensions and diversity of religion across geographies, or within geographies. Paired with historic census data, it allows them to explore relationships to give better context and meaning to the patterns and trends. Maps provide the spatial patterns and relationships; tree maps show relative strength and relationships; charts show trends; cartograms reveal relative numbers of adherence; and motion charts animate trends over time.

DAAR contains historic religion data on adherence, membership and congregations for more than 600 denominations across 120 years. Researchers can drill further into religion data to explore trends in religion practices and beliefs by state or county. And finally, researchers can view religion data in comparison to key variables from the U.S. census, such as race, income and educational attainment.

About The Polis Center

The Polis Center is a self-funded research unit of the IU School of Liberal Arts at IUPUI. It seeks to understand the communities in which we live through an entrepreneurial and innovative approach, finding practical, effective and cost-efficient ways for communities to enhance their capacity for meaningful change. Polis works with professional and scholarly communities, especially through application of digital technologies such as GIS and other geospatial tools.