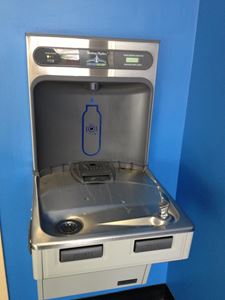 INDIANAPOLIS – The numbers at the top of more than 30 water hydration stations at IUPUI tell the story: The ubiquitous plastic water bottle may have met its match on campus.

Since the first two hydration stations were installed in the Campus Center in 2010, more than 160,000 plastic water bottles have been diverted from the waste stream, according to the counters on the stations.

The electronic display counts each time someone refills a water bottle, providing an equivalent of the number of disposable plastic water bottles that would otherwise have been purchased and discarded.

The hydration stations with the highest counts are the two that are the oldest, along with a third one that has been installed at the Campus Center. The counters on all three show nearly 74,000 plastic water bottles diverted from the waste stream.

Campus now has 35 hydration stations that were installed by Campus Facility Services. In addition to the Campus Center stations, seven are in the School of Dentistry, two in University library, six in Cavanaugh Hall, 11 in the Business/SPEA building, four in Inlow Hall, one in Taylor Hall and one in Lockefield Village.

While the number of stations has increased, the IUPUI Office of Sustainability would like to give an eco-friendly push to schools, departments and offices on campus to consider installing even more hydration stations in their buildings.

“Not only do the hydration stations provide environmental benefits by diverting plastic bottles from the waste stream, but they make it less likely that someone will go to the vending machine and purchase a sugary drink,” said Colleen McCormick, director of the sustainability office. “If people have easy access to water, it encourages healthy behavior all the more.”

While the initial hydration stations were paid for through Greening IUPUI grants, schools are now dipping into their funds to pay for the stations. IU Healthy Change funds are also being proposed as an option for departments to consider.

The School of Dentistry installed the hydration stations in its building last year after learning of the sustainability office’s hydration initiative, said Adam Smith, director of auxiliary services at the dental school. “We thought it was a great idea for Dentistry to get involved in this environmentally friendly project, and the timing was ideal for us.”

“The dental school has health-conscious people who work and study here and who come to our facility for their oral health care,” Smith said. “Use of the hydration stations has been pretty extensive by all three groups, and I think everyone appreciates the reduction in waste.”