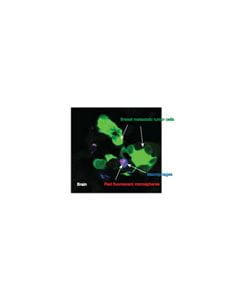 INDIANAPOLIS — An Indiana University School of Medicine breast cancer surgeon is pursuing research that will utilize glass, gold, nanotechnology and Greek mythology hoping to vanquish breast cancer that has metastasized to the brain.

Susan E. Clare, M.D., Ph.D., associate professor of surgery at the IU School of Medicine, is the initiating principal investigator for a $573,000 Department of Defense grant that will allow her to explore a new approach to delivering therapy to brain metastases from primary breast cancer.

As did the Greeks of old, Dr. Clare hopes to covertly deliver “warriors” to the enemy stronghold, in this case a metastatic brain tumor. Her research will explore using a cell from the body’s immune system to deliver chemotherapy directly to the brain metastases. The drug or other therapeutic is attached to the nanospheres, which are carried within the immune cell, much as soldiers were carried within the Trojan Horse. The immune cells travel in the bloodstream and release the drug when it has reached the tumor site.

“The problem for almost all drugs, and HER2-targeted drugs are no exception, is that the blood-brain barrier is a significant impediment to delivering therapies in concentrations that can be effective,” Dr. Clare said. That biological issue caused Dr. Clare to explore other methods of delivering drugs to metastatic brain tumors.

Using nanoparticles called “nanoshells,” developed by Naomi J. Halas, Ph.D., D.Sc., director of the Laboratory for Nanophotonics at Rice University, Dr. Clare hopes to target the brain tumors with lapatinib at a dose sufficient to shut down the signaling pathway needed for the cancer cells to proliferate.

In a July article in the journal Cancer Nanotechnology, Drs. Clare and Halas and colleagues showed that the immune cells carrying the nanoparticles were able to cross the blood-brain barrier and home in to brain metastases in an experimental mouse model.

First, a component of white blood cells called macrophages — versatile cells that initiate an immune response after infiltrating abnormal (cancerous) cells — are collected. The nanoparticles are ingested by the macrophages, which are then released into the bloodstream. Dr. Clare said the macrophages are attracted to the metastases by chemoattractants, which are chemicals produced by the tumor.

These nanoparticles are in Phase I clinical studies for the treatment of head and neck cancer, advanced prostate cancer and lung cancer through Nanospectra Biosciences, based in Houston, Texas. Because the blood-brain barrier was thought to be a significant impediment to delivery, their treatment effectiveness for brain metastases was not included in the initial testing. Dr. Clare’s Department of Defense grant will allow research into three key areas.

The first goal is to show that the chemotherapy drugs can be tethered to the nanoparticles and released at will in the appropriate spot in the brain, Dr. Clare said. Releasing “at will” is critical in the process.

“The drug is released from the particle by shining a laser on the particle,” she said. “The drug is transported between two pieces of DNA that are negatively charged. When exposed to the laser light, the electrons shift from the nanoparticle to the DNA, allowing it to release the drug.”

The macrophages carry the nanoparticle directly to the cancer cells, so when the drug is released, it is exactly where it needs to be to diffuse to the tumor and interrupt the cellular activity of the metastatic cells.

Simple as that may sound, it is not.

The nanoparticle is a silica ball covered with gold, which has been proven to be nontoxic in extensive, long-term scientific studies. The thickness of the shell of gold determines where on the spectrum of light the laser light is absorbed. For maximum tissue penetration, the nanoparticles should absorb light in the near infrared. The nanoparticles developed by Dr. Halas do just that.

However, the bone of the skull presents an additional challenge to delivering sufficient laser power to the nanoparticle. Increasing the power of the laser is not the answer because it will burn the skin. There are many variables to the conundrum, but Dr. Clare has engaged Keith Stantz, Ph.D., adjunct assistant professor of radiology at the Indiana Institute of Biomedical Imaging Sciences, and Jacqueline A. Johnson, Ph.D., associate professor at the University of Tennessee Space Institute, both of whom are experts in nanosecond and femtosecond lasers. The team believes they have a solution to the power challenge and will test it in mouse models.

“That is a big piece of the puzzle,” Dr. Clare said. “Gold is used as the shell for the particle because of its physical properties. Precise calculations for the thickness of the gold, the ideal depth of penetration and the power of the laser were challenges that had to be resolved before the effectiveness of the delivery system for the drug can be studied.”

This research is funded by Department of Defense grant BC120825.