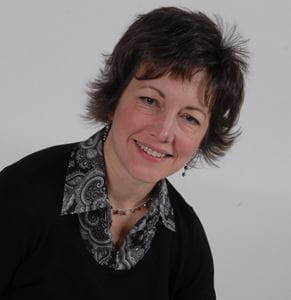 A technique initially used to spare breast tissue during surgery is being researched by an Indiana University School of Medicine physician to improve prognosis, reduce complications and spare lymph nodes in women with gynecological cancer.

Emma Rossi, M.D., assistant professor of obstetrics and gynecology at the IU School of Medicine and a physician researcher at the Indiana University Melvin and Bren Simon Cancer Center, was the first to describe a novel technique for sentinel lymph node mapping in uterine and cervical cancer patients.

Dr. Rossi is testing a novel technique for sentinel node mapping in a study comparing the detection of metastatic disease to routine lymphadenectomy, a more invasive surgical procedure in which the lymph nodes are removed and a sample of tissue is checked under a microscope for signs of cancer.

A dye, the fluorescing dye Indocyanine Green (ICG), is injected into study participants in the cervix or endometrium prior to their cancer staging surgery. Dr. Rossi then uses an endoscope — a thin, tube-like instrument used to look at tissues inside the body — and a robotic camera that is capable of detecting the dye. The dye clearly identifies the nodes which receive drainage of cancer cells from that patient’s tumor.

“By using this technique, we only have to remove the sentinel nodes. Therefore, there is less cutting and potentially fewer complications,” said Dr. Rossi, who is the principal investigator for the IU study. “And we hope this technique will lead to an increased detection of cancer and save lives.”

The IU Simon Cancer Center is one of three sites in which the study is being conducted. The other sites are the University of North Carolina at Chapel Hill and Summerlin Hospital Medical Center, Las Vegas. Dr. Rossi said the sites will enroll 1,000 patients over the next two to three years.