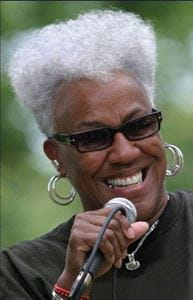 INDIANAPOLIS — Educator and activist Gaye Todd Adegbalola is the keynote luncheon speaker for the annual Joseph T. Taylor Symposium at noon Wednesday, Feb. 27, at the IUPUI Campus Center. In a phone interview, Adegbalola discussed a variety of subjects, including her symposium presentation, which will be a combination of lecture and musical performance.

On being an activist and a musician:

“I have been an activist all my life — as a black person, as a poor person, as a woman, as a single mom, as a lesbian, and now as an old person. … And as a blues musician, I have learned to write about those things. … (At IUPUI) I am going to talk about diversity and working together, and I am going to intersperse some of the songs that I have written that relate to pieces of that puzzle. “

“We basically have two Americas. We have two Americas in terms of low-money-makers and extremely rich people, extremely rich people running the whole world. How do you bring those two people together for the common good of a neighborhood? From what I read about Joseph Taylor, Dr. Taylor, his whole thing was working for the common good of the neighborhood, having the university serve the community.”

On gay rights and civil rights:

“I think those people who are against gay marriage are basically coming from a faith-based perspective, but if we look at civil rights, if I pay the same taxes, I should have the same rights as you. And with marriage, there are 1,100 given rights … visitation in a hospital and making decisions about surgery for example. If I am not married to this person, that person can’t make medical decisions for me. That’s a civil right. We are not talking about whether your church accepts it or not, but we are talking about what’s right in terms of the government.”

On her IUPUI presentation:

“One of my first songs is going to be about civil rights and how things have changed, but they have changed too slowly, and then I’ll come full circle. … There will be a song that relates to feminist things, and I’ll do another song that relates to the commonality of all people. As I talk for a bit I will draw from some of my original material. Music holds people’s attention better than dry words, so hopefully I can keep everybody tuned in.

“In his inauguration speech, (President Obama) talked about Seneca, Selma and Stonewall. I am going to talk about those three entities: Seneca, where the first women’s rights convention was held; Selma, the big (‘60s civil rights) march in Alabama; and Stonewall, the raid on the gay bar, and that is what directly prompted all the gay rights parades and festivals. “

The 2013 Joseph T. Taylor Symposium takes place from 8 a.m. to 2:15 p.m. Wednesday, Feb. 27, at the IUPUI Campus Center, 420 University Blvd. The theme is “It Takes a City: Toward a Diverse and Humane Community.”  For additional details or to register, visit the School of Liberal Arts website.