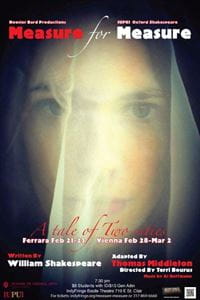 Hoosier Bard Productions, the theatrical arm of the New Oxford Shakespeare project in the School of Liberal Arts at Indiana University-Purdue University Indianapolis, takes to the stage this month for a two-weekend premiere of two back-to-back versions of “Measure for Measure” at the IndyFringe Basile Theatre, 719 E. St. Clair St.

Shakespeare’s original and uncensored “Measure for Measure” will kick off the first weekend, Feb. 21 to 23, while Thomas Middleton’s more familiar 1621 adaptation of Shakespeare’s play will be featured in the second weekend of the show, Feb. 28 and March 1 and 2. Tickets, $8 for students with ID and $15 for general admission, are available at on the IndyFringe website or 317-869-6660.

“Measure for Measure” asks: When is sex legal? What is the relationship between politics and morality? It tells the tale of a liberal duke who leaves his city under the control of the conservative fundamentalist Angelo. Angelo immediately starts enforcing laws that make illicit sex a capital offence, and a young man, Claudio, is sentenced to death for getting his teenage girlfriend pregnant. When Isabella, Claudio’s devout sister, pleads with Angelo to save Claudio’s life, the results are explosive.

Bourus returns to directing after last year’s local and international success of “The History of Cardenio,” Shakespeare’s “lost” play, “a winning blend of the twin geniuses of Cervantes and Shakespeare” (The Indianapolis Star). Bourus’ “fast-paced emotional rollercoaster of a production” received rave reviews and was hailed as “a lively, gripping piece of theatre” (Shakespeare Bulletin) and “a rollicking experience” (Nuvo). Shakespeare scholars from around the world converged on Indianapolis, and the BBC praised “Cardenio” as “bold and brash and funny and moving.” The play and production were also the subject of the WFYI television documentary, “CSI: Shakespeare.”

Audiences will want to come both weekends to experience the two very different worlds of “Measure.” During the first weekend, audiences will be treated to the warmth and optimism of Shakespeare’s Italian summer setting, which invigorates the more lighthearted and comedic version of the original play. The second weekend presents a darker interpretation of the story, set in the winter world of wartime Vienna.

“It’s a fabulous learning experience for IUPUI students to work alongside dedicated professional actors,” Bourus said. “It’s a unique challenge and opportunity for actors to stretch their boundaries and perform two different interpretations of their characters back to back in successive weekends.”

Audiences will have the chance to hear more about the two texts and two interpretations at the talkbacks with Bourus and members of the cast after each performance.

The New Oxford Shakespeare project is also hosting a Master Workshop, “Editing and Performing Measure for Measure,” on from 10 a.m. to 1 p.m. Saturday, Feb. 23. In addition to Bourus, and New Oxford Shakespeare editors Anna Pruitt and Rory Loughnane, the workshop will feature two special guests, Florida State University professor Gary Taylor, one of the world’s leading Shakespeare scholars, and actor-director Christopher Marino of Chicago. In this workshop, participants will have an opportunity to discuss some of the various issues that arise in editing and performing Shakespeare’s plays with the on-site editors of the New Oxford Shakespeare. Topics include early modern adaptation; editing drama as a multimedia art form; and theater as a form of research.