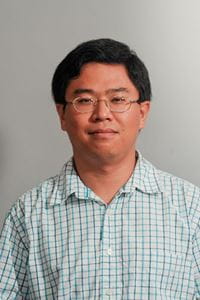 An assistant professor of physics in the School of Science at IUPUI will be among a team of international researchers looking to advance the theory of quantum mechanics, a notion challenged by Albert Einstein and pursued by many of the top scientific minds during the past century.

Le Luo specializes in atomic physics and quantum optics, with expertise in the measurement and manipulation of trapped ions (charged particles). A new grant will allow him to work with researchers at the University of Science and Technology in China, Harvard University and several European universities to conduct a “loophole-free test” of the Bell Inequalities — one of the most fundamental questions in quantum mechanics.

“This research is going to be conducted over much of the next five years or so,” Luo said. “If successful, this could have a major effect on exploring the fundamentals of quantum mechanics as well advancements in quantum information science, which will ultimately make information technology much more secure and efficient than it is today.”

Quantum theory states that there is no local realism. In other words, an object has no pre-existing values until that object is measured. Until then, there is only probability. The theory also suggests that a single measurement may affect two remote, distinct systems described by “entangled” quantum states.

For example, the theory says that if two entangled particles (ions, protons, electrons, etc.) are sent off to remote places, a measurement taken on one particle at one point should indicate the states (position and speed, for example) of both particles, no matter the distance between the two particles.

Einstein’s theory of relativity claims this would be impossible because the particles would have to communicate with one another faster than the speed of light. When considering the local realism for physics laws, the quantum theory could not be complete, Einstein reasoned.

What is reality? What is matter? These weighty questions and others related to quantum theory have challenged scientists for generations.

“Hopefully, the expertise of this group from across the world will be able to make some progress in answering these long-standing questions,” Luo said.

The debate on the local realism of quantum mechanics has been ongoing since the early 1900s. Einstein and collaborators Podolsky and Rosen first challenged the completeness of quantum mechanics on a large public scale in the 1930s. This later became commonly known as the EPR Paradox.

In 1964, European physicist John Bell provided a detailed analysis of the EPR Paradox. Bell’s research produced a now famous result, known as Bell’s Inequality, which suggests specific ways in which local realism can be tested.

Researchers began using photons in the 1980s to test Bell’s theory and determine whether Einstein’s reasoning is right or wrong. Since then, researchers have used various quantum states to test the theory but continued to have loopholes in their methods, therefore falling short of a definitive result. Luo said the new collaboration would, for the first time, be using several different quantum systems — including photons, ions, quantum dots and solid-state ensembles — to test the theory across large distances and hopefully eliminate all possible loopholes, he said.

“It is very important that such Bell Inequality tests be implemented at large distances, across distances such as tens of miles, so that our measurement can be loophole-free by eliminating the possibility the two objects can communicate with one another,” Luo said.

Andy Gavrin, chair of the Department of Physics at IUPUI, said two graduate students at IUPUI will work with Luo on the project. The department should “receive additional financial support and recognition from being involved in this major effort,” he added.

Co-collaborators with Luo include Chuan-Feng Li and Yongjian Han of the University of Science and Technology in China, one of the top research universities in China; Jyrki Piilo, University of Turko in Finland; Heinz-Peter Breuer, Albert Ludwigs University of Freiburg in Germany; and Man Hong Yung of Harvard University