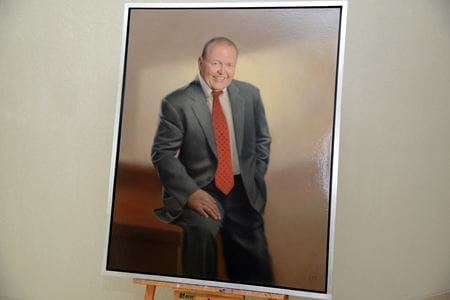 Family and colleagues of Dr. Williams, who served as director of the cancer center from 1992 until his death in 2009, gathered in the center for the event. The portrait was painted by Indianapolis artist and Herron School of Art and Design graduate Rob Day.

The Indiana University Cancer Center was formed under the direction of Dr. Williams, who tirelessly led efforts for its establishment, after the National Cancer Institute awarded a planning grant to the IU School of Medicine for a cancer center in 1992.

As a physician-scientist, Dr. Williams left his mark on the world.  He earned national recognition for his role in investigating the successful use of chemotherapy in the treatment of ovarian and testicular germ cell tumors.  He was consistently ranked among cancer care specialists in “America’s Top Doctors for Cancer,” and the cancer center was consistently ranked during his tenure as among the top clinical programs in the country by “U.S. News & World Report.”

Day, who has been commissioned to create a portraits for such leading magazines as “Smithsonian,” “Time,” “Business Week,” “Esquire” and “GQ,” has also worked locally with such clients as the IU School of Medicine and the Indiana University Robert H. McKinney School of Law.