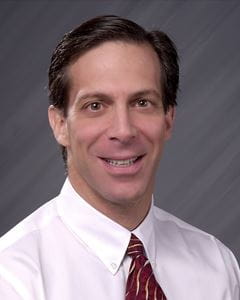 “We found that most studies that are cited for the risk for colorectal cancer when first-degree relatives — parents, siblings or children — have a precancerous polyp do not actually address the issue,” said Regenstrief Institute investigator Thomas F. Imperiale, M.D., professor of medicine at the Indiana University School of Medicine and a research scientist with the Center of Excellence on Implementing Evidence-Based Practice at the Richard Roudebush VA Medical Center in Indianapolis. He is a gastroenterologist and clinical epidemiologist. “Screening is very important, and properly designed studies are needed to put science behind clinical screening recommendations.”

Current guidelines for people who have first-degree relatives with precancerous polyps range from those of the U.S. Preventive Services Task Force, which makes no specific screening recommendation, to the guidelines of the American Cancer Society and the American College of Gastroenterology, which recommend a colonoscopy starting at age 40, or 10 years younger than the earliest diagnosis in the family (whichever comes first), and repeated every five years if the first-degree relative was diagnosed with a precancerous lesion before age 60.

The study, “Risk for Colorectal Cancer in Persons With a Family History of

Adenomatous Polyps” appears in the May 15 issue of the Annals of Internal Medicine. The systematic review was supported by the National Cancer Institute. David F. Ransohoff, M.D., of the University of North Carolina co-authored the paper with Dr. Imperiale.

“This is another important reason to know your family’s health history,” Dr. Imperiale said. “Until there is better evidence available, we suggest talking with your primary care physician and basing the decision on whether and how to be screened on the age of the youngest first-degree relatives with precancerous polyps and whether the precancerous polyps are classified as advanced or not.”

A third to a half of Americans who undergo a colonoscopy are found to have one or more precancerous polyps, according to Dr. Imperiale, so it is extremely common to have a first-degree relative with a precancerous polyp. However, only 5 to 10 percent of these growths are advanced.

Until new, rigorous studies inform screening guidelines, Dr. Imperiale recommends an initial screening colonoscopy if the first-degree relative was younger than 60 and the polyp was advanced when found. If a first-degree relative was 60 or older when the advanced polyp was found, or any age when nonadvanced polyps were detected, he suggests that the family member be screened as average risk. Average-risk options include a high-sensitivity stool blood test annually or a colonoscopy every 10 years.

“The high prevalence of precancerous polyps highlights the need for new, well-designed studies to better understand the colorectal cancer risk of having a first-degree relative with a precancerous lesion — differentiating between those that are advanced (and more serious) and those that are non-advanced,” said Dr. Imperiale, a member of the IU Melvin and Bren Simon Cancer Center and a physician with IU Health. “If everyone who has a first-degree relative with a precancerous lesion is screened aggressively, the health care system would be overwhelmed, and it is possible that the net burdens would outweigh the benefits of screening. We need to make decisions based on better evidence.”