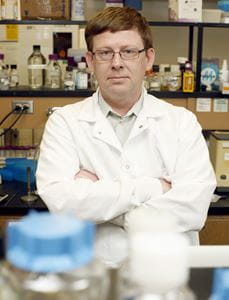 This study, published Friday in the online journal PLoS One, is the first by Indiana University researchers working with a four-year, $7 million grant from the National Institutes of Health’s Human Microbiome Project. It is also the first to reveal that urogenital bacterial communities of young men are surprisingly stable and that some of these bacteria are similar to species that colonize and protect healthy young women from sexually transmitted infections.

The research contradicts the accepted wisdom that pre-sexual men did not have bacteria in their urinary tracts.

“Young men had bacteria that looked similar to those of young healthy women,” said David E. Nelson, Ph.D., an assistant professor of biology at Indiana University Bloomington and the principal investigator of the research. “We think that these bacteria may promote genitourinary health in men, just as they do in women. This contradicts previous dogma that only sexually transmitted pathogens colonize the male urethra.”

The findings open doors for additional research that will lead to a deeper understand of men’s health.

“This is the first real investigator of the normal microbiology of men before they begin sexual activity,” Dr. Nelson said. “There are parallels between normal bacteria in young men and those in young women that are known to be protective.”

This discovery was not possible before the mapping of the human genome and the development of powerful sequencing tools, said J. Dennis Fortenberry, M.D., M.S., principal investigator of the NIH grant and professor of pediatrics in the Division of Adolescent Medicine at the IU School of Medicine.

The investigators used the advanced sequencing techniques to evaluate bacteria on the head of the penis as well as in the urethra in 18 adolescents younger than 18 years, he said. The researchers will follow these adolescents, along with dozens of others, for several years to determine how the types and amounts of bacteria present in and on the penis changes over time.

They also discovered changes in the bacteria after sexual activity began.

“We have some sense that some of the bacteria in the urethra are essential to keeping men healthy,” Dr. Fortenberry said. “This research and the new technology will open doors to explore what is good about the bacteria, what they do and how.”

“At this point in the research, we are asking ‘chicken and egg’ questions,” Dr. Nelson said. “What comes first, the loss of normal bacteria, making a person more susceptible to sexually transmitted infections or, do you get colonized with other bacteria for some reason and that puts a person more at risk of contracting an STI.”

This research, like other longitudinal studies, should shed light on the sequence of events that leads to STIs and other urinary tract diseases such as a common male condition called non-gonococcal urethritis, whose cause is unknown.

Drs. Fortenberry and Nelson said they decided that looking at the microbiome of a cohort of young, non-sexually active males was the only way to determine what bacteria was normal for men. Without that information, researchers can’t determine the difference between healthy and unhealthy bacteria and know how to treat disease.

Other Indiana University faculty involved in this research are Barry Katz, Ph.D., Barbara Van Der Pol, Ph.D., MPH, and Deming Mi. Other contributors to the research include George Weinstock, Ph.D., and Erica Sodergren, Ph.D., of Washington University in St. Louis, and Qunfeng Dong, Ph.D., of the University of North Texas.