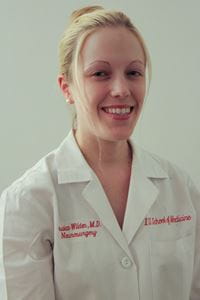 Speaking at the 80th Annual Scientific Meeting of the American Association of Neurological Surgeons in Miami, Fla., Jessica Wilden, M.D., chief resident in the Department of Neurosurgery, presented data from experiments that used rats that were trained to drink alcohol, named “alcohol-preferring (P) rats.”  The work revealed that a region of the brain called the basolateral amygdala showed increased activity when the rats were exposed to smells that they had been taught to associate with alcohol. The amygdala is an almond-shaped structure inside the brain that has been linked to emotion and motivation.

Dr. Wilden and primary investigator Zachary Rodd, Ph.D., associate professor of psychiatry, and post-doctoral fellow Sheketha Hauser, Ph.D., placed alcohol-preferring rats in environments with, or without, alcohol, along with different odors that the rats then learned to associate with the presence or absence of alcohol. The odors had no intrinsic connection with alcohol and included anise (licorice), orange and peppermint.

“When you look at addiction, there is a learning component. People have rituals before they use cocaine, or before they go to a particular bar to consume alcohol. Pretty soon it is the needles, or the environment, that becomes a cue associated with drug use,” said Dr. Rodd.

“After a while, even though people may be attempting to abstain from drug use, they are exposed to cues that have previously been paired with drug use, which stimulate drug cravings and may cause them to relapse,” he said.

“It indicates that relapse may have a neuronal cause – meaning, it is a physical problem,” she said.

“In addition to linking the basolateral amygdala to cravings prompted by external cues – in this case, smells – the research indicates that the mechanisms for craving and for inhibiting that craving are located in different brain circuits,” said Dr. Rodd.

These experiments suggest that the basolateral amygdala could be a potential target for therapies aimed at helping control cravings associated with drug addiction, according to the researchers.

The research was funded by grants from the National Institute on Alcohol Abuse and Alcoholism. Based on this work, Dr. Rodd was recently awarded a five-year $1.95 million grant from the same agency to continue the research.