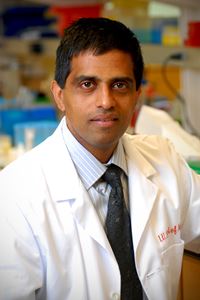 In a study published today in the March 22 issue of the journal Diabetes, Raghu Mirmira, M.D., Ph.D., Eli Lilly and Co. Professor of Pediatric Diabetes, and Sarah Tersey, Ph.D., assistant research professor of pediatrics, reported that using a mouse model of type 1 diabetes, they had been able to identify problems in insulin-producing cells before the mice actually developed symptoms of diabetes.

They were also able to identify elevated levels of a protein in mice resulting from the cellular dysfunction that might serve as a biomarker for a simple blood test to identify who is actually in the process of developing diabetes.

The dysfunction identified, called endoplasmic reticulum stress, or ER stress, has previously been linked to type 2 diabetes, the form of diabetes that generally appears first in adults. ER stress had not been previously shown as occurring before the development of type 1 diabetes, often called juvenile diabetes, which usually is diagnosed in children and young adults.

Insulin enables the body’s cells to use glucose for energy. Type 1 diabetes occurs when the body’s immune system attacks insulin-producing beta cells in the pancreas. Researchers are uncertain why the immune system targets the cells. Taking insulin enables people with type 1 diabetes to live, but they are at risk of serious complications such as heart and kidney disease, nerve damage and vision problems.

“We could have a much greater impact preventing diabetes in the first place, but the problem is identifying people who are developing the disease before it’s diagnosed and applying the appropriate preventive therapies,” said Dr. Mirmira, director of the basic diabetes research group at the Herman B Wells Center for Pediatric Research. Certain traits, such as having a close relative with diabetes and having elevated levels of particular antibodies, indicate an increased risk. But many of the people at risk won’t develop diabetes, so it wouldn’t be appropriate to give all of them preventive treatments, Dr. Mirmira said.

The endoplasmic reticulum is an organelle in the cell that processes proteins that will be excreted from the cell — in this case, insulin. With a variety of laboratory tests, Drs. Tersey and Mirmira said they found clear signs of ER stress, including the release of a precursor to insulin called proinsulin. As the prediabetic mice progressed into a state of ER stress, the researchers were able to measure significantly elevated levels of proinsulin, Dr. Mirmira said.

Although Dr. Mirmira cautioned that these studies were done in laboratory animals, and that it is difficult to know whether they apply to humans, he suggested that they are a first step toward identifying and possibly treating humans who might progress to type 1 diabetes. Dr. Mirmira noted that most such treatments, which would attempt to prevent the body’s immune system from attacking insulin-producing cells, are still in the experimental stage.

More generally, Dr. Mirmira said, “This makes us think even more that the two diseases (type 1 and type 2 diabetes) are not as different as once thought. There’s a lot at the molecular and cellular level that the diseases share in common.”

The research was supported by grants from the Juvenile Diabetes Research Foundation, the National Institutes of Health and the Indiana Clinical and Translational Sciences Institute.