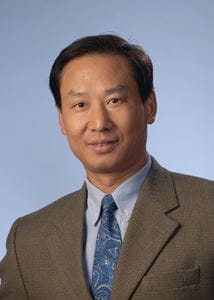 It’s not that the human immune system doesn’t recognize HIV. Indeed, an infection causes the body to unleash antibodies that attack the virus, and initially some HIV is destroyed.

In laboratories at the Indiana University School of Medicine, Andy Qigui Yu, M.D., Ph.D., assistant professor of microbiology and immunology, is testing a promising compound developed by a Harvard Medical School scientist that may counteract HIV’s ability to hijack the immune system’s protection mechanism.

“HIV is very clever. As it replicates inside cells, it takes on the CD59. The virus is covered with CD59, so the immune system treats the virus like your own normal cells,” Dr. Yu said.

In November, the Bill & Melinda Gates Foundation announced it had awarded nine new Grand Challenges Explorations Phase II grants, one of them to Dr. Yu. The Phase II grants were awarded to researchers who had received initial $100,000 awards and had shown promising results.

The new grant will support not only Dr. Yu’s research into compounds that may block the ability of HIV to hide behind the CD59 “cloak,” but also his work to identify the mechanism the virus uses to incorporate CD59.

“If we find that mechanism, then we can develop something to block that incorporation, and HIV may lose that protection from the immune system,” Dr. Yu said.

Researchers have been able in the past to generate antibodies that successfully attacked HIV in the laboratory. But these antibodies have failed in human testing because the virus in the body escapes from immune system attacks, Dr. Yu said.

At Harvard, Assistant Professor of Medicine Xuebin Qin, M.D., Ph.D., and his team crafted a molecule from a bacterial toxin that is known to bind to the CD59 protein., In laboratory tests, Yu, Qin and their colleagues administered the molecule to blood samples taken from patients with HIV in an attempt to disrupt HIV’s hijacking of CD59. The bacteria toxin molecule latched on to the CD59 proteins, revealing the viral particles to be invaders and enabling the antibodies to attack the virus.

Reporting their findings in the Journal of Immunology in December 2010, the researchers suggested that the molecule could potentially be developed into a new therapy to fight HIV/AIDS.

More recent experiments have indicated that the administration of the molecule enabled the antibody-complement to attack infected cells and not just the virus particles found in the blood samples. The next steps will include more extensive testing of the molecule in a broader range of patient samples, Dr. Yu said.

Grand Challenges Explorations is a $100 million initiative funded by the Gates Foundation to help researchers worldwide explore innovative ideas in how to solve persistent global health and development challenges. Initial grants of $100,000 are awarded two times a year. Successful projects have an opportunity to receive a follow-on grant of up to $1 million.

This announcement has been corrected to accurately report the role of Xuebin Qin as developer of the molecule derived from the bacterial toxin.