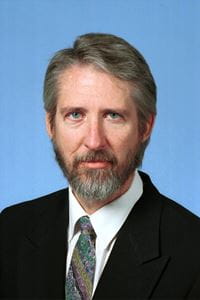 Dr. Morphis began his career at IU in 1980 as an assistant professor in the Department of Radiation Oncology. He was a widely respected researcher and lecturer.

“Dr Morphis served as chair of the department from November of 2004 till December of 2007—three vitally important years. This was a time of tension within the department and the school due to economic uncertainties and changes within the health care system. This uncertainty could have resulted in faculty leaving, lack of interest of students in training at IU School of Medicine, and by extension, gaps in patient care. Jim’s unswerving commitment to the department and school stabilized the situation reflective of the enormous respect he commanded. This was at a personal sacrifice by Jim because he postponed his retirement plans and took on an extra leadership load. This was the essence of Jim—it was not about him; rather it was about patients, learners and colleagues. We owe much to Jim and mourn his passing,” said D. Craig Brater, M.D., dean of the IU School of Medicine and IU Vice President for University Clinical Affairs.

In 1992, Dr. Morphis was introduced to a 22-year-old patient who was afflicted with an aggressive brain tumor. Dr. Morphis determined that proton beam therapy would be an optimal treatment option and, working with a team at the IU Cyclotron Facility (now Integrated Science and Accelerator Technology Hall), found an innovative way to successful treat the patient with protons. Early treatments paved the way for the development of the Midwest Proton Radiotherapy Center (now the IU Health Proton Therapy Center), which opened in 2004.

In the early years of the Proton Therapy Center, Dr. Morphis continued to have an interest in the technology, consulted on numerous projects, and after early retirement from IU, he offered his services as a visiting physician.

A native of Spokane, Washington, he attended Loma Linda University School of Medicine where he did his residency before joining the IU School of Medicine faculty. After his retirement, he moved to Post Falls, Idaho, but continued to work in Bloomington on a part-time basis.

He is survived by his wife, Deb; sons, James and Heath; stepsons, Brandon and Brian Cook; his mother and stepfather Jeannine and Bob Lininger; his siblings, Robert, Thomas and Jennifer Morphis; his step-mother, Barb Morphis, and step-brother Terry Moran.

Memorial donations can be made to Jill’s House in Bloomington at www.jills-house.org.