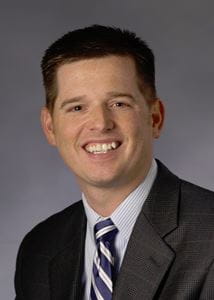 Dr. Sperring, who is an assistant professor of clinical pediatrics at the Indiana University School of Medicine, joined IU Health in 2002 and has served as chief medical officer of Riley at IU Health since 2009.

Marilyn Cox has been serving as interim president and CEO and will now return to her role as chief nursing officer and senior vice president for Nursing and Patient Care Services.

“We’re fortunate to have both of these strong leaders within the IU Health family. Marilyn continues to be an integral part of Riley with more than 20 years of service and we’re grateful for her work during this time of transition,” said Daniel F. Evans, Jr., president and CEO, IU Health. “After a national search, we determined that Dr. Sperring is the best fit for Riley. As a pediatrician himself, he has a true passion for children’s healthcare, he’s a valued and respected leader, he’s already invested in Riley and our vision, and has established relationships with Riley’s community partners around the state.”

As president and CEO, Dr. Sperring will be responsible for providing overall strategic direction and leadership for pediatric services throughout IU Health. This includes direct operational and strategic oversight of pediatric programs, services and facilities at Riley at IU Health, along with shared program oversight for pediatric programs based in the community hospitals. Dr. Sperring will serve on the senior executive team for IU Health.

“I am proud to continue to serve Riley and humbled by the opportunity to lead the team as we continue to transform children’s healthcare,” said Dr. Sperring. “Riley already has a long and storied history but there is even more important and exciting work to come. I could not ask for a better team of physicians, nurses, staff and volunteers, and we are resolved to providing the highest levels of patient-centered care and innovative treatment to the children of Indiana and beyond.”

When Dr. Sperring first joined IU Health, he was appointed director of the Pediatric Hospitalist Program for Methodist’s Children’s Pavilion as part of the Riley Children’s Health Partnership. He led the expansion of the program to IU Health North in 2005 and then both IU Health West and Riley at IU Health in 2007. Later that year, Dr. Sperring was appointed associate chief medical officer at Riley at IU Health and assumed the position of chief medical officer upon the retirement of Dr. Richard L. Schreiner.

Dr. Sperring is a graduate of Emory University and received his medical degree from Vanderbilt University School of Medicine in 1995. He completed his pediatric residency at the Naval Medical Center San Diego and served as an officer in the United States Navy Medical Corps from 1995-2001. Prior to joining the faculty at Riley, Dr. Sperring was a community pediatrician at the Robert E. Bush Naval Hospital in Twentynine Palms, Calif., and New Castle Pediatrics in New Castle, Ind. He and his wife Amie, a graduate of Indiana University School of Nursing, reside in Noblesville, Ind.