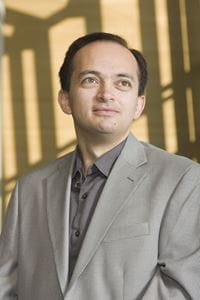 Work led by Leonid L. Rubchinsky, Ph.D., associate professor of mathematical sciences in the School of Science at IUPUI, examines the exchange of electric signals within the Parkinson affected brain, demonstrating that repetitious, overlapped firing of neurons can lead to waves of overly synchronized brain activity. A report on the model appears in the September 2011 issue of the journal Chaos: An Interdisciplinary Journal of Nonlinear Science, a publication of the American Institute of Physics.

“This mathematical model of the brain’s circuitry provides insight that we could not obtain from animal or human brains in experimental or clinical studies.  With this new modeling we, and others, can now better study the mechanisms of information transmission in the Parkinsonian brain – both how the mechanisms work and how they fail. We can also learn about the properties of the cells that are responsible. All this knowledge is critical to the eventual development of therapies to correct defective transmissions found in the brains of those with Parkinson’s disease,” said Rubchinsky, who is affiliated with the Center for Mathematical Modeling and Computational Sciences in the School of Science at IUPUI.

Parkinson’s disease is a progressive disorder causing degeneration of neurons in the substantia nigra, a region of the brain that produces the chemical dopamine. Symptoms of Parkinson’s disease include tremor, rigidity or stiffness, slowness of movement and impaired balance and coordination. Approximately 60,000 new cases are diagnosed annually in the United States according to the National Institutes of Health. Currently there is no cure for Parkinson’s disease.

“Technically we have the tools needed for deep brain stimulation – stimulators, long lasting batteries and implantable chips – but we don’t have the algorithms – the formulas and other mathematical tools necessary to know what we are trying to stimulate and how.  Our model, and others that will follow, should make deep brain stimulation a feasible therapy for Parkinson’s disease within the next decade,” said Rubchinsky, who is also a researcher with the Stark Neurosciences Research Institute at the IU School of Medicine.

In addition to his research, Rubchinsky, a computational neuroscientist, teaches courses in calculus for the life sciences to undergraduate students and several biomathematics courses to graduate students in the School of Science.

The School of Science at IUPUI is committed to excellence in teaching, research and service in the biological, physical, behavioral and mathematical sciences. The School is dedicated to being a leading resource for interdisciplinary research and science education in support of Indiana’s effort to expand and diversify its economy. For more information visit www.science.iupui.edu